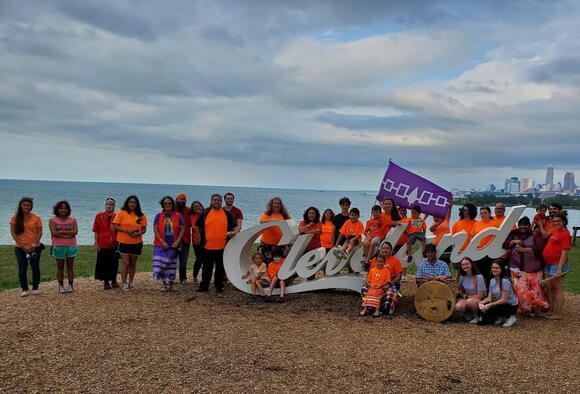 Orange Shirt Day originated in Canada with a purpose to open the door for conversations about residential school survivors and victims. Credit: Courtesy of Molly Rambeau

An important part of Indigenous peoples’ history can be honored on Ohio State’s campus by a simple gesture Thursday — wearing an orange shirt.

Orange Shirt Day is meant to promote global conversations surrounding residential schools, state-funded, Christian-assimilation programs that over 150,000 children of First Nations were required to attend, beginning in the 19th century until the 1970s, according to AP News . Many children were verbally abused and beaten, forced to assimilate into Canadian society.

Molly Rambeau, vice president of the Native American and Indigenous Peoples Cohort and member of the Cheyenne River Sioux tribe, said the day originated in Canada when residential school survivors wanted to commemorate and honor the victims.

“Be an ally and be willing to have those hard conversations and speak up,” Rambeau, a fourth-year in forestry, fisheries and wildlife, said. “Being uncomfortable is where you have growth.”

“Being vocal about it and creating a space for not only young people to talk about, but as well as our elders to come together and feel comfortable to talk about it because they’re the ones who went through it and lived through it,” Rambeau said.

Rambeau said the schools have created generational trauma and caused many Indigenous peoples to lose elements of their culture.

“We were exploited — culturally, physically, emotionally, sexually abused at the hands of this nation,” Rambeau said.

Madison Eagle, coordinator of Student Services and intercultural specialist at the Multicultural Center, said it’s important to bring attention to this issue and create as many allies as possible for the small population of Indigenous people at Ohio State.

“Not a lot of people know about this issue, especially being in Ohio; we don’t have a federally recognized tribe,” Eagle said.

Another way to show support is to shop at Indigenous-owned shops, Eagle said.

“If people can purchase stuff from Indigenous people and artists, that’s a tremendous influx of support that is so needed,” Eagle said.

Eagle said the Native American Indian Center of Central Ohio and the Native Alliance Wellness Center are both resources available in Columbus.

“On Sept. 30, wear orange,” Eagle said. “It doesn’t have to be an official T-shirt — anything orange, and let people know why.”