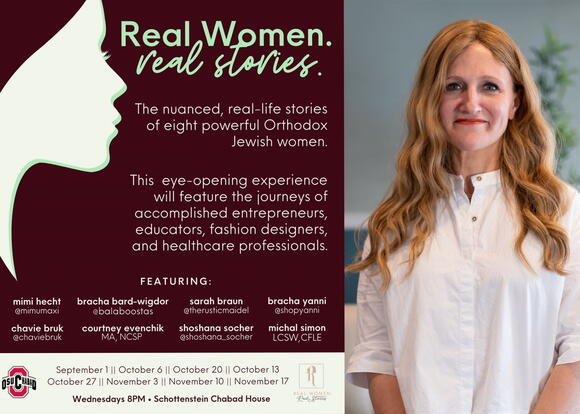 A clinical psychotherapist, fashion designer and chef will all speak via Zoom at the Ohio State Chabad House Wednesday, but instead of Buckeye gear, they will wear wigs, headscarves and cover their knees.

The “Real Women, Real Stories” speaker series at the Ohio State Chabad House introduces Orthodox Jewish women aiming to change the narrative. Sarah Deitsch, program director at the Chabad House, said misrepresentation of the Orthodox community has been an ongoing conversation and she wants to get students involved, whether they are religious or not.

“I felt like it was important now because I want them to know right away that there is another voice out there,” Deitsch said. “Real women, real stories, who are living beautiful, strong, meaningful lives.”

“Real Women, Real Stories” was created in response to the Netflix reality show “My Unorthodox Life,” which Deitsch said paints a one-dimensional, biased picture of her community.

“I felt like it was generalizing and saying that everybody who lives that life is feeling oppressed and can’t really, truly show who they are,” Deitsch said. “Something stirred inside me because I live an Orthodox Jewish lifestyle, and I love my life.”

With a successful soft launch in September, the program will bring seven more Orthodox Jewish female speakers to the Chabad House. Starting Wednesday, talks will be held via Zoom from 8-9 p.m. on Wednesdays through Nov. 17.

When narrowing the list to eight speakers, Deitsch said she tried to consider what Ohio State students value professionally, whether it was a future in medicine, law, education or psychology. The chosen speakers specialize in culinary arts, education, psychology, fashion and more.

“I wanted these women to be role models in the fields of what the students are in,” Deitsch said. “Different people that I follow who are an inspiration to me, who I knew were embodying this idea of Jewish femininity, powerful orthodox women, who could be role models and examples.”

Speaker Sarah Braun, a kosher food blogger, chef and 2008 Ohio State alumna with a degree in international relations, said she felt similarly misrepresented by Netflix’s portrayal of the Orthodox community.

“By doing this series, Sarah [ Deitsch] is trying to show that every individual is an individual,” Braun said. “We’re just people who happen to believe in God and happen to choose to live our lives this way. I think it’s just easy for the media to box us in because we have a label when not everyone has a label.”

Braun, who now practices an Orthodox lifestyle, said she didn’t grow up religious. She said when she was asked to participate, she was honored but hesitant, in part because of the prominence of some of the other speakers.

“A lot of them are like celebrities on Instagram. These are people that I follow, and I think that they’re incredible,” Braun said. “So for me, I was like, I don’t really have much to offer. I wasn’t raised that way, but I’m hoping I can give a little insight from my angle. I went to Ohio State, I get it, and I also have probably had a lot of the thoughts that other people have regarding [Orthodox Jews] and the world that we live in.”

The next “Real Women, Real Stories” features Chavie Bruk who will speak about infertility and her experience raising five adopted children in Montana.

Students who are interested in attending a meeting for “Real Women, Real Stories” can attend the Wednesday in-person sessions at the Chabad House at 207 E 15th Ave. and interact with speakers over Zoom.