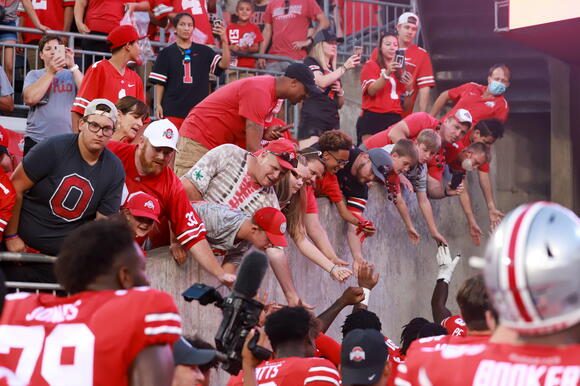 The No. 10 Buckeyes got back in the win column Saturday, albeit unconvincingly.

Ohio State (2-1) allowed Tulsa (0-3) to hang within a touchdown until midway through the fourth quarter. But, a few late defensive stops and touchdowns lifted the Buckeyes past the Golden Hurricane 41-20.

Here’s The Lantern’s five takeaways from an unsettling win for the Buckeyes: 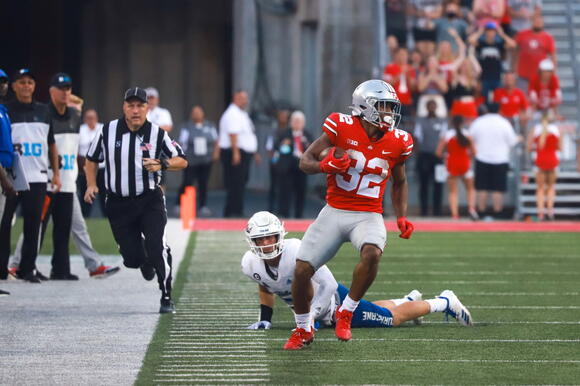 Ohio State’s offense lined up on the right hash mark of its own 48-yard line with time ticking down to end the third quarter when TreVeyon Henderson got his 22nd carry of Saturday’s win.

He dodged and darted between the tackles before cutting to the outside boundary to sprint the rest of the way for his third touchdown of the game, but he added his name to the history books as well.

Henderson had four carries of at least 31 yards, darting for 48- and 52-yard touchdown runs with his final explosive play going for 54.

Head coach Ryan Day said after the game that redshirt freshman running back Miyan Williams — who started each of the first two games — was healthy, but he wanted to run “the hot hand” in Henderson.

That he did, bailing out the shaky passing game, now ranking No. 12 in the Football Bowl Subdivision with 346 rushing yards in 2021. Day said after the loss to then-No. 12 Oregon that he wanted to see more balance in his offensive attack after the Buckeyes managed just 128 yards on the ground to redshirt freshman quarterback C.J. Stroud’s 484 through the air.

Against Tulsa, it was the exact opposite as Stroud threw for 185 yards on 15-for-25 through the air, a touchdown and an interception.

In addition to Henderson’s historic 277-yard day, junior running back Master Teague III added 62 yards of his own after coming into the day with six carries on the season.

Ohio State showed the most even-matched charge with 294 passing and 201 rushing yards in the 2021 season opener against Minnesota.

On the season, Akron’s defense is allowing 223 yards through the air per game and 174 on the ground on average, so the Buckeyes will have a good opportunity to establish its offense ahead of conference play.

No catches for Olave With 12:02 left in the fourth quarter, Stroud completed his longest pass of the day to wide receiver Chris Olave, which would’ve been the senior’s first catch of the day — but that was all wiped out on a facemask penalty.

Earlier in the game, Stroud was flushed out of the pocket, rolling to his right after breaking a few tackles before throwing a strike to Olave, who was streaking toward the sideline. The ball went through his hands and fell harmlessly behind him, but set the tone for his day: uneventful.

It was surprising, to say the least, that not one of Olave’s four targets were hauled in, considering he led the team in receiving with 243 yards and proved to be a catalyst in the Buckeyes’ offense early in the season.

Olave had at least 117 yards in each of the first two games as one of Stroud’s favorite targets, putting his first-round-projected talent on full display by getting himself open and showing great yards-after-catch ability.

Olave will have a chance to get back on track against an Akron defense that has allowed the third-most pass yards per game in the Mid-American Conference, but only one 100-yard receiver in Temple graduate wide receiver Randle Jones. Of the nine defensive backs that recorded a tackle Saturday, only three were juniors or older.

It is not safe to assume that freshmen and sophomores will come in and look like veterans, and the unit certainly has not, ranking 118th in the country while allowing 289.7 yards per game.

However, Day and players alike have reiterated the notion that the team would like to get better every day in practice, and the defensive backs showed that against Tulsa.

Yes, they surrendered a gaudy 428 yards to Tulsa redshirt junior quarterback Davis Brin, but in coverage they accounted for nine of the defense’s season-high 10 passes defended.

The final drive allowed Brin to pad his stats a bit, racking up 52 yards against the Buckeyes’ defense as the game was already decided.

The highlight for the defense came with 1:50 remaining in the fourth quarter when redshirt freshman safety Cameron Martinez intercepted Brin, knifing his way through would-be tacklers to reach the end zone for the Buckeyes’ second defensive touchdown of the season.

Secondary coach Matt Barnes called plays as defensive coordinator Kerry Coombs moved up to the press box, which had a big impact on the run defense that allowed only 73 rushing yards. Barnes will have an opportunity to improve the pass defense this week against Akron as Day intends to have him continue to call the defense. Senior offensive lineman Thayer Munford went down in a heap during the first half with an apparent leg injury before coming out in the second half in street clothes and a walking boot.

Day said that the injury did not appear to be long term, so his status for this weekend is questionable, but against an Akron opponent who has only recorded three sacks in 2021, the 2020 first team All-Big Ten tackle’s services may not be necessary.

After shutting out Minnesota’s defensive front Week 1, Ohio State’s unit up front has allowed two sacks in each of the previous two games with both this week coming after Munford’s injury.

The line struggled to get a push against Oregon’s defensive front, even without sophomore defensive end Kayvon Thibodeaux, but righted the ship against Tulsa, bullying their defensive line en route to a 323-yard rushing performance.

“He had an amazing job, communicated really well with me and Luke (Wypler),” Petit-Frere said. “Couldn’t be prouder of him. Just stepping in and filling his role when his number was called.”

If Munford is unable to go Saturday against Akron, the plus is that Jones appeared in all eight games in the 2020 COVID-19-shortened season.