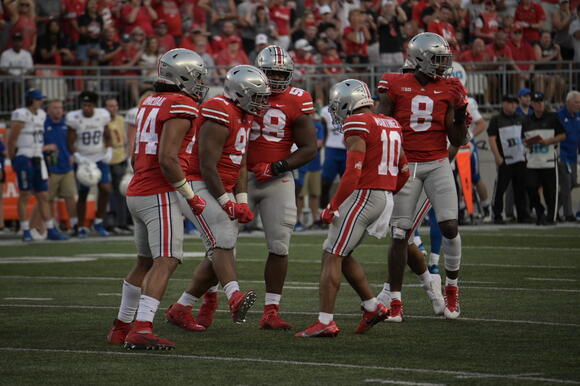 For the second-straight week, the Buckeyes’ defense surrendered more than 500 total yards — but there were some positive takeaways in their 41-20 triumph over Tulsa.

Although No. 9 Ohio State felt pressure from the Golden Hurricane until midway through the fourth quarter, the Buckeyes saw standout performances from multiple young contributors. With secondary coach Matt Barnes replacing defensive coordinator Kerry Coombs as the primary play caller, head coach Ryan Day said he was pleased with the way the defense played.

“I thought we’d change some things up, just how we did things structurally on game day. We’ll look at the film and analyze that and see how that went,” Day said. “I thought for the most part they played with good energy. We prepared well during the week. Everybody was on the same page. There were some in-game adjustments that were done. Much better and more efficient than the week before.”

The Buckeyes saw major improvements in their run defense against the Golden Hurricane. Against Oregon, Ohio State surrendered 269 rushing yards, but saw success against Tulsa — limiting it to just 73 yards on the ground.

Ohio State’s run defense held the Golden Hurricane to just 2.7 yards per carry, prompting Day to be complementary of his front seven.

“I thought we stopped the run better,” Day said. “I thought that we did mix up some of the looks.”

Although the Buckeyes improved in the ground attack, Ohio State’s secondary had a rough outing — most notably at the free safety position.

Brin’s big day did not come without any blemishes, however, as the Boerne, Texas, native tossed two interceptions — including a pick-six to redshirt freshman safety Cam Martinez in the game’s final two minutes.

Martinez, a high school quarterback, said he channeled his offensive experience during that play.

“I had all the confidence in the world during that play, during that drive, that we were gonna get a pick. I didn’t know who was gonna get it. Luckily it was me,” Martinez said. “I just had confidence., I just knew once I caught it that my teammates were going to have my back too and make all the right blocks and take it to the house.”

Alongside Martinez, there were several other underclassmen who made crucial plays throughout Saturday’s contest.

Sophomore safety Ronnie Hickman was the other Buckeye to intercept Brin, with his coming late in the second quarter. Hickman added a team-high nine tackles.

Martinez pointed to Burke’s raw talent as the reason he’s hit the ground running in his freshman campaign.

While Martinez’s interception put the game on ice, it was a fourth-quarter sack from freshman defensive tackle Tyleik Williams that saved the day for the Buckeyes.

With Ohio State clinging to a seven-point lead and Tulsa driving the ball into Buckeyes’ territory, the 6-foot-3, 215-pound defensive tackle sprinted through the line — virtually untouched — to wrap up Brin for a loss of 17.

The play knocked the Golden Hurricane off course and gave possession back to the Buckeyes, who scored on their next drive.

Although Ohio State allowed Tulsa to pile up yards, Day was proud of the way his defense played — especially the young Buckeyes.

“There’s going to be growing pains along the way, but whatever you invest in these guys, you’re going to get back here in the future. That’s the exciting part here,” Day said. “I think we have a really exciting young team here. We’re young, but we’re also talented. If we can keep building and get stronger, then the future is going to be really, really bright.”