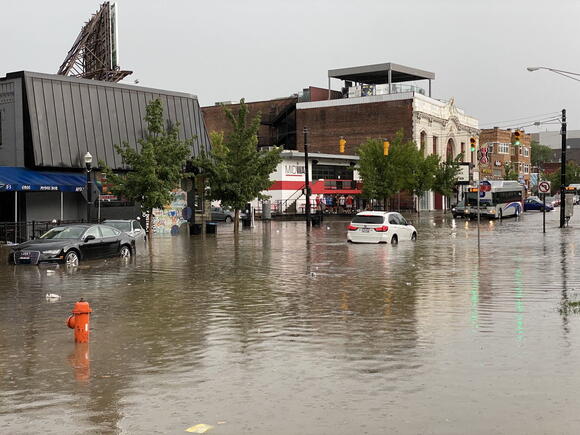 As instances of hurricanes have increased throughout the U.S., Columbus has seen heavy rainfall and flash flooding as a result of the changing climate.

Campus storm sewers are too small to adequately redirect the amounts of stormwater Columbus has endured, Laura Fay, chair of the science committee at the Friends of the Lower Olentangy Watershed, said. She said pipes with outdated capacities, climate change and campus development are the main issues worsening flooding on Ohio State’s main campus and threatening the Olentangy watershed.

“Regulations are based on holding back 9/10ths of an inch,” Fay said. “So recently, if we had two-inch rain, that’s over anything it’s designed for.”

Jason Cervenec, the Byrd Polar and Climate Research Center’s education and outreach director, said the increasing volatility of weather events is only adding to the potential impact of storms, as there is more water at more frequent intervals.

“In the state of Ohio, we get 32 percent more heavy precipitation events than we used to, and those are typically defined as us getting about one and a quarter inches of rain in a 24-hour period,” Cervenec said.

In an adaptation plan and risk and vulnerability report for the City of Columbus, Ohio State’s Byrd Polar and Climate Research Center found the city and campus to be under-prepared for 100- and 500-year storms — extreme weather, said to only happen once in a certain number of years. Preparation for such events is done using the National Oceanic and Atmospheric Administration’s Atlas 14 model , which is based on past weather data.

John Newsome, the administrator of the division of sewerage and drainage for the city of Columbus, said the U.S. Senate is revising the Atlas’s estimates, and the city will use the most current version of the model when it is made available.

Cervenec said this reliance on historical data thwarts the city’s understanding of future storms, putting it at a disadvantage when setting new requirements for infrastructure.

“The past is a very bad prologue for what’s to come; things are changing, and so that prologue is not representative of what our future looks like,” Cervenec said.

And things are indeed changing: Cervenec said Ohio’s average temperature warmed 2.3 F between 1951 and 2012, which puts Ohio’s increase above the national average of 1.6 F .

Fay said campus runoff can affect river flow, resulting in more frequent flooding, which alters water quality due to the chemicals and litter in the runoff. She also said the city of Columbus rejected a project proposed by Friends of the Lower Olentangy Watershed and a capstone class in the department of Environment and Natural Resources aiming to install trash traps on drainage pipes.

The amount of water entering the Olentangy watershed during a storm erodes the riverbank, displacing cobble and sand, and the washed away slurry of soil and water can smother downstream habitats, Fay said. Water erosion also affects the riverbank at points of entry.

The riverbank near stormwater drainage is scoured down to hard clay, Fay said.

“It’s real greasy and it’s hard for macroinvertebrates to dig through it because it’s unlivable, basically,” Fay said.

Newsome said the amount of piping in Central Ohio — over 4,000 miles worth — constrains the city’s ability to install trash traps and other pollution countermeasures.

“We have them in certain cases, but it would be problematic if we had them on every single storm outflow we have in the city,” Newsome said.

Newsome said stormwater is not typically treated before it is released into the Olentangy.

Fay said students can reduce their environmental impact on the Olentangy by taking care not to litter, cleaning up pet waste and joining Friends of the Lower Olentangy Watershed for river clean-up events.

Students interested in learning more can visit the Byrd Polar and Climate Research Center , the Friends of the Lower Olentangy Watershed or download the PDF at go.osu.edu/waterways to learn about Ohio State’s storm sewers.