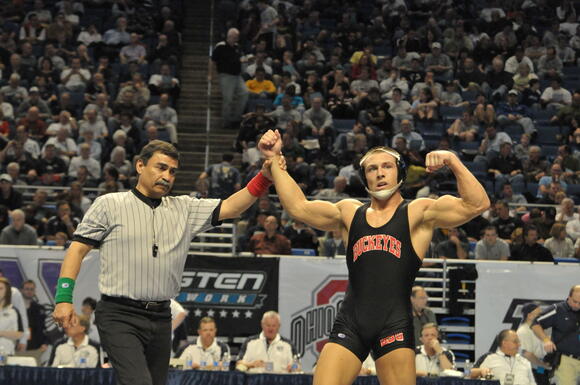 While Lance Palmer has found success off the mats, winning the $1 million Professional Fighters League Featherweight division prize in Madison Square Garden in 2018 and 2019, it was his time at school that cemented him as an Ohio State Hall of Famer. Credit: Courtesy of Ohio State Dept. of Athletics

While Lance Palmer has found success off the mats, winning the $1 million Professional Fighters League Featherweight division prize in Madison Square Garden in 2018 and 2019, it was his time at school that cemented him as an Ohio State Hall of Famer.

Palmer was officially inducted into the 2021 Ohio State Athletics Hall of Fame Friday and is the 17th inductee from the wrestling program.

Palmer, along with the rest of the Hall of Fame class, was initially supposed to be inducted last summer, but the pandemic delayed the special moment.

“It’s the icing on top for my college career,” Palmer said. “I’ve waited a year, but the moment is well worth the wait.”

Palmer wrestled at Ohio State from 2007-2010, racking up over 121 career victories to place in the top 10 in program history. He is one of eight four-time All Americans in the university’s history.

As a true freshman in 2007, he landed in the top four in the 149-pound weight class at the NCAA National Championship Tournament.

He also advanced to the 2010 NCAA championship finals for his highest-ranked national finish, along with a Big Ten title that season.

Palmer said he was always a Buckeye — even before his high school career began.

“I knew in eighth grade Ohio State was where I wanted to go,” Palmer said. “No matter what letters or phone calls I got from other schools, I knew the camaraderie that Ohio State had to offer.”

“Every single practice he maximized his effort,” Jaggers said. “He really got it and pushed himself day in and out.”

Before arriving at Ohio State, Palmer was a four-time state champion out of St. Edwards High School near Cleveland. He graduated with a record of 150-6 and won the National High School Coaches Association Senior National Championship.

Jaggers said he knew Palmer was going to be special based on the way he positioned himself on the mat.

“He’s very stingy. He was hard to score on and could scramble really well, something not everyone would give him credit for,” Jaggers said. “He was a brute and positionally strong. The ability to fight off takedowns was something I admired.”

Jaggers played a key part in attracting Palmer to Ohio State. From showing him around campus to letting him stay at his house, Palmer said he was grateful for the way Jaggers made him feel welcome.

“He made me comfortable from the beginning,” Palmer said. “On visits, he would always be around and answering questions, and when I finally arrived, he continued to be this great guy and he really pushed me to be my best.”

Current head coach Tom Ryan arrived at Ohio State the same time Palmer did. Ryan coached previously at the University of Hofstra from 1995-2006.

“I arrived and met Lance my first day. I heard about his legendary high school career, and from day one, his work ethic was among the best I’ve ever seen,” Ryan said.

Ryan coached Palmer all four years at Ohio State and said he was very impressed with his leadership growth over the years.

“He was able to take constructive criticism and assess his mistakes on the mat. He used that to help his teammates around him,” Ryan said. “He helped everyone around him to grow an elite mindset.”

The end of Palmer’s four years with the Buckeyes didn’t stop him from pursuing his goals.

A year after his collegiate career ended, a new career in Mixed Martial Arts started.

Palmer competed in the Resurrection Fighting Alliance and won the Featherweight Championship after his 7-0 start.

“I was hesitant in the beginning, but once I got my feet under me and won my very first fight, I knew I was hooked,” Palmer said.

Palmer went on to compete in the PFL, winning the 2018 and 2019 Featherweight Championships.

A career of titles and medals, Palmer’s favorite moment comes from New Year’s Eve in 2018, fighting in the PFL Featherweight tournament for the $1 million cash prize.

Palmer debuted in the PFL, fighting Steven Siler and winning by unanimous decision. A rematch of the two took place on that New Year’s Eve night.

“It was nerve-racking and complete madness. New Year’s Eve, under the spotlight at Madison Square Garden, to be able to win there and raise the belt and the check was a surreal feeling,” Palmer said.

Palmer continues to fight with the PFL. With a competitive MMA record of 22-5, Palmer said he’s happy to have achieved great success in two different sports.

“I wanted to do my best. “I wanted to be an example for anyone to accomplish their goals at the highest level,” Palmer said. “I look forward to what’s next.”