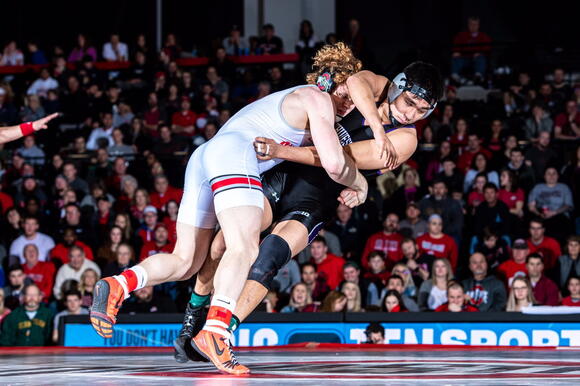 The World Team Trials is an event where the champion in Men’s Freestyle, Women’s Freestyle and Greco-Roman will represent Team USA at the 2021 Senior World Championships in Oslo, Norway, from Oct. 2-10.

Greco-Roman is wrestling in which the use of the legs for attack or defense is forbidden and a fall is gained by the contestant who pins both of an opponent’s shoulders to the ground. Greco-Roman also refers to the weight class in kilograms instead of pounds.

This differs from the freestyle wrestling used in college, which allows scoring below the waist.

“We are proud of the daily disciplines that each of these men displays,” Ohio State head coach Tom Ryan said. “To have three college athletes in the finals of the WTT is a strong showing and a testament to their commitment.”

In the 97-kilogram weight class, Boykin started off the weekend strong, defeating Chad Porter 8-0 in the quarterfinals and Lucas Sheridan 3-1 in the semis.

In the best two-of-three final, Boykin fell to G’Angelo Hancock, losing 8-2 and 5-0.

Brady Koontz had a bye in the quarterfinals before taking on Billy Sullivan under the 55-kilogram weight class. Koontz finished the dual in fast fashion, defeating Sullivan 8-0 in just 2:21 during the semis.

Under the 77-kilogram weight class, Schierl won in the quarterfinals via decision and swept the semis 4-0. He ultimately fell 9-0 and 9-7 in the finals to Jesse Porter.

While Dylan Koontz didn’t make the finals in the 60-kilogram weight class, Ohio State associate head coach J Jaggers said Koontz had an encouraging weekend and has a lot to look forward to.

“Dylan Koontz wrestled angry on Sunday after getting caught in a headlock and pinned Saturday in his only match,” Jaggers said. “He bounced back from that very nicely and should be proud of that.”

While it didn’t go the way they hoped, Jaggers said he’s proud of the way his guys competed and represented themselves.

“Sometimes in a winner-take-all event like the World Team Trials, it’s hard to be satisfied with anything other than first, but all of them wrestled to or above their seeds, so that was nice to see,” Jaggers said. “I’m not sure how many other guys finished top three in Greco while actively being on a college roster, so we’re proud of them and their progress.”

“It’s always a great time to see them and cheer for them,” Jaggers said. “They’re disappointed to not be the guys representing the U.S. in the world championships, but they competed hard and represented themselves well.”

While the tournament didn’t end up in the Buckeyes’ favor, a lot of learning experience was gained.

“To make a world team you have to win the best of three,” Ryan said. “Focusing on your strengths and staying disciplined is going to be critical going forward.”