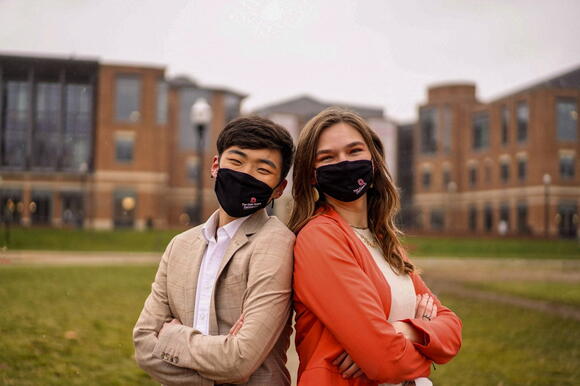 Ohio State is the only school in the Big Ten without an LGBTQ+ center and other related initiatives for LGBTQ+ identifying students. USG is pushing for an LGBTQ+ Center, an Out List, gender inclusive housing and LGBTQ+ Learning community. Credit: Courtesy of Jacob Chang

The Undergraduate Student Government is working to provide more resources for LGBTQ+ students on campus.

In 2019, the USG LGBTQ+ campus climate survey found that Ohio State is the only Big Ten school without an LGBTQ+ center and other related initiatives to support LGBTQ+ students. USG President Jacob Chang confirmed that there is still no center and said LGBTQ+ students have needs in areas such as housing and learning centers, which USG is working to address.

“We’re just hoping to improve the housing resources because there are trans students and other queer students on campus who don’t feel comfortable living in the house and with other students,” Chang, a fourth-year in psychology and political science, said.

USG’s Justice and Equity Committee pushes a list of LGBTQ+ initiatives seeking to amend university policy to offer resources and space for the LGBTQ+ community at Ohio State, Chang said.

Chang said USG is seeking the addition of an LGBTQ+ Center, an Out List — a list of LGBTQ+ faculty and staff at the university –– gender-inclusive housing and an LGBTQ+ learning community. Each initiative focuses on different aspects of the LGBTQ+ community’s daily life on campus.

Chang said by pushing the formation of these different initiatives, USG is asking for more resources and space for the LGBTQ+ community to identify with and host events to further express themselves. Some initiatives, such as gender-inclusive housing, are focused on the existing Office of Student Life system and striving to amend university policy for the LGBTQ+ community.

USG Vice President Anna Valerius said these initiatives are smaller pieces in a larger process of creating an inclusive space for LGBTQ+ students.USG has been trying to implement these initiatives since 2019, but the need for an LGBTQ+ Center has existed in the community long before USG started pushing for it.

Valerius, a fourth-year in political science, said the formation of the Tiger Team — a group of university staff, students and administrators under USG’s Justice and Equity Committee who work together to address inclusivity —  is a “big win” during this process.

Chang said the team will work to identify and communicate the LGBTQ+ community’s needs.

“They identified a lot of different goals that they’re going to be focusing on for LGBTQ+ inclusion and belonging and just to make sure that students know what resources already exist so then they can also identify what needs to exist in the future, as well as how to communicate those things better,” Chang said.

Chang said USG is in the process of identifying a space to build an LGBTQ+ center and working with administrators to make it official.

“This is a multi-level topic that we’re hoping to bring awareness that LGBTQ+ Center at Ohio State is there for more resources that are best suited to protect them, support them, help them to achieve the success that they want to see,” Chang said.