The Lantern1 day ago 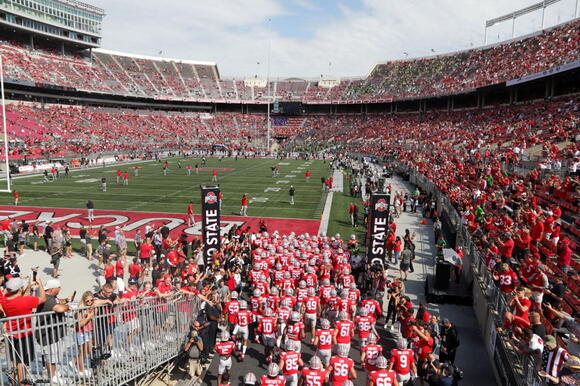 After a disastrous home-opener on the field and in terms of game day operations, Ohio State’s athletic department announced solutions to ensure a smoother game day experience Wednesday.

The home-opener saw ticketing systems and stadium WiFi fail alongside undermanned gates, creating delays at the student entrances, particularly near the south end of Ohio Stadium.

The delays prompted a statement from the Ohio State department of athletics Saturday, citing “a technical issue with wifi and learning curves with new technologies and new systems.”

“[Saturday] was a landmark day, with digital tickets and mobile parking passes,” the athletic department stated. “We want to apologize to those who experienced delays entering the stadium that were caused by a number of reasons. We will learn from today, make improvements and we anticipate next week will be better.”

With attention to these mishaps, Ohio State will increase the number of ticket scanners, staff and metal detectors at gates to help speed up the entry process, according to a release.

The athletic department is also encouraging fans to load their tickets into mobile wallets, citing a smoother entry process because WiFi is not needed to access tickets.

“One of the most important and proactive steps fans can do to assist the entry process at the gates is to load their mobile ticket to their iPhone or Google Pay wallet before arriving at the stadium,” the athletic department stated Wednesday. “It helps the process considerably, and it guarantees tickets will be available because WiFi is not needed to access tickets from a mobile wallet.”

The department also stated that 66 percent of scanned tickets during the home opener were already preloaded to mobile wallets.

Ohio State will add 27 more pedestal ticket scanners alongside the same number of staff members to the hardest-hit gates Saturday. The athletic department will also have 80 additional hand-held ticket scanners at the most affected gates to serve as backups in case the pedestal system faces similar issues to the home-opener.

An increased number of metal detectors, police officers and stadium security will also be enforced at the student section gates on the south end of the stadium.

In order to help with the prevalent WiFi issues in Ohio Stadium during Saturday’s home-opener, Ohio State will have additional on-site engineering support to monitor and manage stadium WiFi and connection at entry sites.

This story was updated Wednesday, Sept. 15 at 12:40 p.m. with added information on preloading tickets to mobile wallets and Saturday’s athletic department statement.

Ohio State is the only school in the Big Ten without an LGBTQ+ center and other related initiatives for LGBTQ+ identifying students. USG is pushing for an LGBTQ+ Center, an Out List, gender inclusive housing and LGBTQ+ Learning community. Credit: Courtesy of Jacob Chang.

The Buckeyes’ men’s soccer team celebrates during the Ohio State-Northwestern game on March 7. Ohio State won 4-2. Credit: Christian Harsa | Special Projects Director. Staring down the top 10 ranked Zips, Ohio State men’s soccer head coach Brian Maisonneuve and the Buckeyes knew that Wednesday’s game would be an uphill battle. Against the odds, though, Maissonneuve and his team were up for the challenge.

Father and son look at Captain America’s shield at the Marvel exhibition. Credit: Courtesy of the Museum of Pop Culture. Avengers fans –– assemble and prepare to welcome the largest-ever Marvel Universe exhibition to Columbus.

Excitement for bubble tea is bubbling over in Columbus

Neil deGrasse Tyson to put on show at Palace Theatre

A page of the comic “Big Hero 101” by Open Door artist JD Hirst, whose artwork is featured in the exhibition at the Carnegie Gallery. Credit: Courtesy of JD Hirst. Bright colors, intricate narratives and detailed drawings characterize “THE WRITING IS ON THE WALL,” the latest art exhibition on display at the Columbus Metropolitan Library’s Carnegie Gallery.

Ohio State defensive coordinator Kerry Coombs walks off the field before the Ohio State-Oregon game Sept 11. Ohio State lost 28-35. Credit: Mackenzie Shanklin | Photo Editor. Just two seasons ago, Ohio State’s defense was one of the best in the nation, ranking second in points and yards allowed per game, plus leading the country in sacks.

Football: Day sounds off on defense