The defense is off to a shaky start

Just two seasons ago, Ohio State’s defense was one of the best in the nation, ranking second in points and yards allowed per game, plus leading the country in sacks.

The first two games of the 2021 campaign have proven that those days are in the rearview mirror.

The Buckeyes defense was torched by Oregon’s balanced offensive attack, surrendering 236 yards through the air and 269 more on the ground.

As bad as the numbers sound, the tape was arguably worse.

The Ducks’ offensive line bullied Ohio State’s front seven, setting the edge for backs to get to the boundary and sealing lanes in the trenches, opening a hole for junior running back CJ Verdell to scamper 77 yards for his second touchdown of the game.

In order to try and cut down on the run game and provide a security blanket for the linebackers, the secondary crept up, often biting on the run-pass option.

One glaring example of that was where senior quarterback Anthony Brown pulled a handoff from Verdell’s grip before an easy pitch-and-catch for a 14-yard touchdown to freshman tight end Moliki Matavao. Ohio State sophomore safety Bryson Shaw over-pursued the run as Matavao streaked past him.

Kerry Coombs owned the blame Saturday, taking criticism as the team’s defensive coordinator. Head coach Ryan Day confirmed Tuesday no changes will be made to the coaching staff, but change in performance on the field must come.

More so, Day said the defense is certainly a glaring issue.

“Giving up too many yards and too many points. That’s the bottom line,” Day said. “I think now, it’s not just a single game, it’s a little bit of a pattern. Took a long, hard look the last 48 hours at everything that’s going on and certainly going to make some adjustments.” After the first half against Minnesota a week ago, fans called for redshirt freshman C.J. Stroud to be benched.

Perhaps it was because Buckeye fans were graced with Justin Fields’ playmaking abilities for the past two years that the expectation coming in was extremely high, but since that halftime pep talk, Stroud has lit up the stat sheet.

Some drops hurt Stroud’s stat line, but some costly overthrows showed his inexperience, like the fourth-quarter interception where he was flushed out of the pocket and rolled to his right before badly airmailing senior wide receiver Chris Olave for his second interception of the season.

Stroud was Ohio State’s only hope Saturday as the run game only managed 128 yards on the ground, but his efforts down the stretch fell just short as his pocket wasn’t as clean as it was for much of the first two games, getting sacked twice in the final 3:47 against Oregon.

On the season, though, the Empire, California, native’s 389 yards per game rank fourth in the Football Bowl Subdivision — the first time since Haskins in 2018 that Ohio State has had a top-five passing attack. Stroud is on pace for the second-most yards through the air in Big Ten history, with a chance to break Haskins’ record in postseason play.

Jaxon Smith-Njigba rose to the occasion 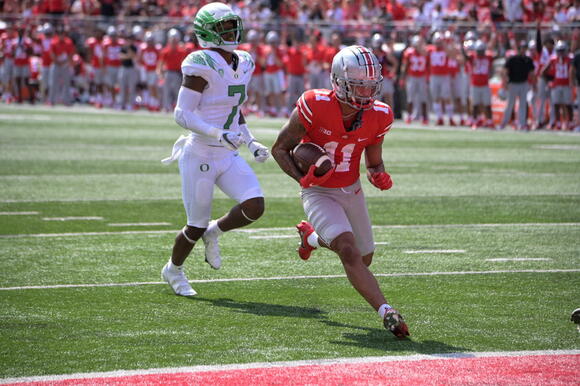 Sophomore wide receiver Jaxon Smith-Njigba welcomed himself to Buckeye Nation in 2020 with an incredible circus catch against Nebraska, but that was his lone score of his 10-catch freshman season.

In the cold, rainy Minneapolis atmosphere, he snagged just two passes for 12 yards in Week 1.

Smith-Njigba’s best game yet with the Buckeyes came Saturday when he hauled in seven passes for team highs in yards and touchdowns. His 145 yards ranked as the ninth-highest clip for FBS wide receivers in Week 2.

Smith-Njigba showed out in the team’s spring and summer camps, earning the third spot in one of the deepest wide receiver rooms in the country to beat out weapons like sophomore Julian Fleming and talented freshmen Emeka Egbuka and Marvin Harrison Jr.

With teams game-planning for wide receivers junior Garrett Wilson andsenior Olave, Smith-Njigba will find matchups against opposing teams’ slot cornerbacks most of the time — something he took advantage of Saturday.

He ran all the typical combination routes for a slot receiver — slants, seams and outs — on each of his seven catches, displaying a great tendency to get himself open at the line of scrimmage, as well as the ability to gain yards after the catch.

Olave and Wilson are both projected first-round prospects, likely to nab each of the first-team All-Big Ten honors, but don’t be shocked to see Smith-Njigba’s name penciled into one of the selections as well. It’s never good to flaunt the duties of a punter, but 24-year-old freshman Jesse Mirco deserves such praise.

The freshman’s first two punts were from Oregon’s 34-yard line and Ohio State’s own 37-yard line, but they both ended at the same destination: the Ducks 1-yard line.

The 62-yard missile off the Australian-style punter’s boot was tied for the fourth-longest punt since 2018, trailing four-year fourth-down anchor Drue Chrisman.

Mirco joins former Buckeye Cameron Johnston as products of ProKick Australia — a program that trains punters to come to North America and kick at the college and NFL levels.

In games against better defenses where scoring will not come as easy, field position will be at a premium, so a weapon like Mirco will help to flip the field in the Buckeyes’ favor. Ohio State hadn’t lost at Ohio Stadium in the regular season in just over four years, so to say it is in unfamiliar territory is an understatement.

Stroud said graduate defensive lineman Haskell Garrett approached him after the game with a message.

The Buckeyes 2021 start is reminiscent of 2014: a new quarterback, high expectations and an early home loss to deter things.

That team had a fire lit under them from that point en route to winning the inaugural College Football Playoff.

Day said Tuesday that the key to moving forward is how the team responds to Saturday’s loss.

“I think the great thing about something like this is two things,” Day said. “One, the issues that are there get exposed and you get a chance to really address them with this group. And then two, you find out a lot about a lot of people when adversity hits. You find out about their true character.”

A vial of the Johnson and Johnson COVID-19 vaccine. The first doses of the vaccine at Ohio State were administered March 2, 2021. Credit: Owen Milnes | Lantern File Photo. The deadline to request an exemption from Ohio State’s COVID-19 vaccine mandate is approaching.

The Ohio State defense celebrates after a big play during the Ohio State-Tulsa game Sept.18. Ohio State won 41-20. Credit: Gabe Haferman | Assistant Photo Editor. For the second-straight week, the Buckeyes’ defense surrendered more than 500 total yards — but there were some positive takeaways in their 41-20 triumph over Tulsa.

Ohio State senior midfielder Emma Goldean (8) fights for the ball against a Virginia player in the Buckeye goal zone during the Ohio State-Virginia game on Sept. 19. Ohio State lost 1-2. Credit: Sophia Tobias | For The Lantern.

Paige Khoury, the parent of a first-year student and organizer of the protest against crime near campus, leads a group of parents and students around the Jesse Owens Plaza outside Ohio Stadium Saturday. Credit: Sarah Szilagy | Special Projects Reporter.

Ohio State then-freshman Maxwell Moldovan tees off for the Buckeyes during a match. Credit: Courtesy of Ohio State Dept. of Athletics. After finishing 12th in their first invitational of the season at Marquette, head coach Jay Moseley and the Buckeyes’ men’s golf team knew they would have to improve in their next tournament. This week, Moseley and his team did just that.

Leanne Bough looks downfield as she dribbles the ball during the Ohio State-Iowa game on March 19. Ohio State lost 2-1. Credit: Christian Harsa | Special Projects Director. The No. 24 Ohio State field hockey team is looking to add to its four-game winning streak as it travels Friday to East Lansing, opening up conference play with No. 25 Michigan State. The Buckeyes will return to Columbus and host No. 11 Virginia Sunday.