The Lantern2 days ago 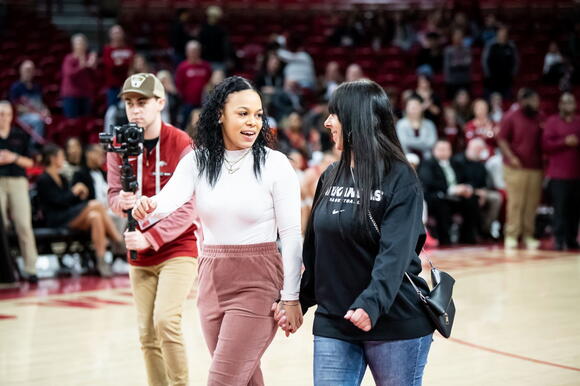 Jalen Powell (left) will fulfill her lifelong commitment to the game and serve as an assistant coach on the Ohio State women’s basketball team during the 2021-22 season. Credit: Courtesy of Ohio State Dept. of Athletics

As the daughter of an NBA trainer, Jalen Powell has spent her entire life immersed in the game of basketball, studying every facet of the game since she was an infant.

“She was in the gym with her father in a pacifier,” Powell’s mother, Carol Havdouglas, said.

Today, Powell has replaced her baby pacifier with a coaching whistle.

The 26-year-old will fulfill her lifelong commitment to the game and serve as an assistant coach on the Ohio State women’s basketball team during the 2021-22 season, the Buckeyes announced Aug. 31.

Powell began her love affair with basketball at an early age, where she would often sit in the stands with her mother and watch her local high school’s basketball games with a quiet intensity and focus uncommon among young children.

“She always sat quietly and was interested as a little kid,” Havdouglas said. “When other kids would play in the halls and run to the vending machine, she stood in the stands and watched.”

Powell’s early fascination with basketball allowed her to master the game and earn a coaching role at just 10 years old. She helped coach her younger sister, Sabrina, and her youth team through various tournaments during her childhood.

“When Sabrina had her games, she would sit on the side and help the team,” Havdouglas said. “[Sabrina’s coach] would let Jalen sub and tell them what to do. She would sometimes just let her do her thing.”

Powell said she helped coach her sister’s team well into her teenage years, where she taught the players a number of different offensive and defensive concepts during practices and team drills.

During her four years as manager, Powell said she learned to appreciate the people like herself who work behind the scenes to ensure that their college athletics programs are functioning and successful — a mentality she can apply to her new job at Ohio State.

“I don’t care what your title is. I don’t care if you’re the janitor,” Powell said. “I am always going to treat people with respect because sometimes those people are the most overlooked, yet they do the most important work.”

Following Powell’s stint at Mississippi, she quickly ascended up the coaching ranks, working two years as a graduate assistant at the University of Arkansas.

Powell then spent the next year working for the man who helped shape her love for the game — her father, Jerry — at his North Babylon, New York, training facility, “Basketball Results.”

Powell said she rekindled the passion she had for basketball during her formative years by shadowing her father and learning about his coaching style.

“I’ve been watching my dad train since I was literally born, so it was a good learning experience for me,” Powell said. “There’s a lot of things in life that you go through and can’t control, but your energy and effort towards every situation you come across is something you can control.”

After spending a year under her father’s wing, Powell served as an assistant coach at Florida A&M University during the 2020-21 season. She primarily worked with the guards and wings and served as a liaison for academics, equipment, admissions, athletic training and housing.

Now, with decades of coaching experience behind her, Powell is poised to play out her dream and make an impact for the Buckeyes this season as an assistant coach — a reality that she still cannot wrap her head around.

“It’s still so surreal for me,” Powell said. “Ohio State is such a big brand, such a big school. So the fact that I am even here at a young age is such a big accomplishment. I’m just happy to be here.”

On the court, Powell said she has started to develop relationships with the players and coaches and learn the role she will play on the team.

Part of her new role includes working with the guards and wings and helping construct the Buckeyes’ fast-paced style of play, one she said will best suit the strengths of their backcourt players as well as match the direction the women’s game is headed for in the future.

“We play a really fast paced [style of] basketball, which I think is good with the way women’s basketball has evolved over the past few years,” Powell said. “Everyone is trying to adapt to this positionless style of basketball.”

The Buckeyes will look to avenge a disappointing 13-7 campaign where they dropped five of their last six games and served a self-imposed postseason ban.

Although the season is near, Powell has found time to reflect on her basketball journey and the long-term commitment she has made to the sport.

“Basketball has always been a part of my life. When something is embedded into you and it’s all you know, you just try to find your way to make the most of it,” Powell said. “I hope that [my journey] is an example that as long as you work hard and do the right thing, your possibilities are literally endless.”

Ohio State is the only school in the Big Ten without an LGBTQ+ center and other related initiatives for LGBTQ+ identifying students. USG is pushing for an LGBTQ+ Center, an Out List, gender inclusive housing and LGBTQ+ Learning community. Credit: Courtesy of Jacob Chang.

The Buckeyes’ men’s soccer team celebrates during the Ohio State-Northwestern game on March 7. Ohio State won 4-2. Credit: Christian Harsa | Special Projects Director. Staring down the top 10 ranked Zips, Ohio State men’s soccer head coach Brian Maisonneuve and the Buckeyes knew that Wednesday’s game would be an uphill battle. Against the odds, though, Maissonneuve and his team were up for the challenge.

Father and son look at Captain America’s shield at the Marvel exhibition. Credit: Courtesy of the Museum of Pop Culture. Avengers fans –– assemble and prepare to welcome the largest-ever Marvel Universe exhibition to Columbus.

Excitement for bubble tea is bubbling over in Columbus

Neil deGrasse Tyson to put on show at Palace Theatre

A page of the comic “Big Hero 101” by Open Door artist JD Hirst, whose artwork is featured in the exhibition at the Carnegie Gallery. Credit: Courtesy of JD Hirst. Bright colors, intricate narratives and detailed drawings characterize “THE WRITING IS ON THE WALL,” the latest art exhibition on display at the Columbus Metropolitan Library’s Carnegie Gallery.

Ohio State defensive coordinator Kerry Coombs walks off the field before the Ohio State-Oregon game Sept 11. Ohio State lost 28-35. Credit: Mackenzie Shanklin | Photo Editor. Just two seasons ago, Ohio State’s defense was one of the best in the nation, ranking second in points and yards allowed per game, plus leading the country in sacks.

Football: Day sounds off on defense