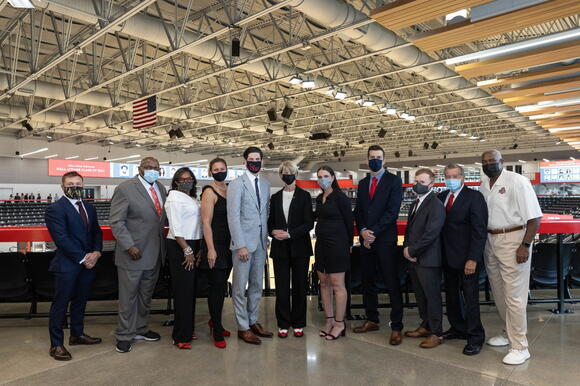 After a year-long wait, the Ohio State Athletics Hall of Fame, hosted by the Varsity “O” Alumni Society, inducted 12 new members during its banquet ceremony Friday.

The pandemic forced the Class of 2021 to postpone its ceremony originally planned for fall 2020. Among the newest cast of inductees, former three-time All-American gymnast Daren Lynch said, in a way, it’s sweeter to have waited longer to officially earn the honor.

“It’s been a strange year, obviously, but getting to now get together in person and celebrate this is just awesome,” Lynch said. “I’m ecstatic. It’s a super surreal weekend being around all these legends and telling stories.”

Lynch is one of just three Buckeyes to win the NCAA vault championship, coming in 2001, but he journeyed down a path less taken to earn his call to the hall.

He was a non-scholarship athlete until he earned one prior to his senior season — when Ohio State claimed its third NCAA team championship. Lynch said he didn’t expect the honor, but it exemplifies the value of hard work.

“I think dealing with adversity, sort of feeling like if your feet are stuck in mud, then you’ve got to lift them harder and lift them higher to get out of the mud,” Lynch said. “You can still be up against the best doing that.”

The inductees gathered for a luncheon before the induction Friday, and Steven Kehoe, former setter on the men’s volleyball team, said the meal allowed him to reflect.

Entering the hall alongside three Buckeyes — Amanda Furrer from the rifle team, Lance Palmer from the wrestling team and Samantha Prahalis from women’s basketball — who also competed while Kehoe was a Buckeye, he said “it’s cool” to earn an induction alongside others who played during the same era.

“What I’m most excited about is getting teammates back here and my family,” Kehoe said. “It’s a great group. We’re all just excited to be here.”

Former captains and linemen Aaron Brown and Regis Monahan raised the total number of football inductees to 128. Former head coach Francis Schmidt, who sparked the “gold pants” tradition after wins over Michigan, joined current director of track and field and cross country Karen Dennis to bring the number of head coaches in the hall to 30.

Each inductee in attendance received an award and spoke for several minutes on stage at the Covelli Center, which senior deputy athletic director Janine Oman said Ohio State was proud to open, as it was not around when the new members competed.

During the opening remarks, Oman encouraged the inductees to enjoy the special moments of the evening.

“The district did not look anything like this when you were here,” Oman said. “I know many of you personally, and it’s an honor that you could join us and join a distinguished group that’s here. It is something very special we hope you remember forever.”

The inductees sat at tables alongside their families and guests, taking in a ceremony they initially expected to happen a year sooner.

No matter how long the group waited, Dennis said the induction finally coming to fruition helped commemorate lasting legacies and fill her heart with gratitude.

“It’s just good to get a whole bunch of great players together and share the moment together,” Dennis said. “It’s something that, collectively, we’ll always be able to remember.”