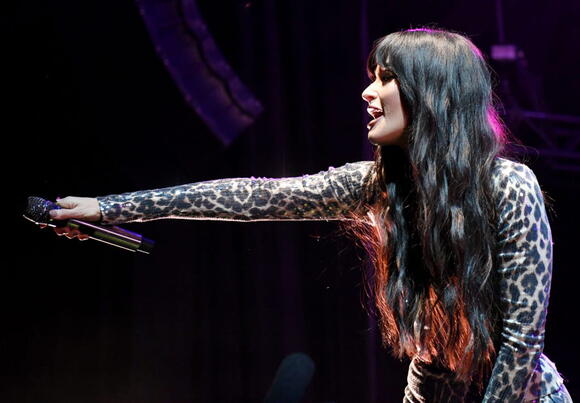 Upon initial listen of her long-awaited fourth studio album, “star-crossed,” it’s almost difficult to recognize Kacey Musgraves as she dives into a new style of music, channeling a more futuristic sound than previous projects.

Following quarantine and a divorce from her husband of nearly three years, Ruston Kelly, Musgraves poured a lot of herself into “star-crossed.” From songs of heartbreak and insecurity to love ballads, Musgraves puts her entire heart on the line with this album.

The album begins slowly, with the title track opening up the 15-song project. Musgraves sets the scene for a brief story of heartbreak, detailing the events of her divorce in a three-minute ballad of acoustic guitar and choir vocals.

Instead of using the album to tell a chronological story, Musgraves arranges “star-crossed” rather haphazardly with the sad, helpless “good wife” placed right beside the upbeat, romantic “cherry blossom.” Listeners are thrown back and forth between heartbreak and excitement throughout most of the album, which could also be a reference to Musgraves’ wide range of emotions during the creative process of making the project.

Musgraves is famous for her somewhat unconventional approach to country, with progressive lyrics and a fair share of disco-inspired tracks. While fans likely expected this approach on “star-crossed,” the album has a much more futuristic sound to it, despite being labeled a country album by Billboard .

Musgraves ditched the acoustic guitar and opted for more of an electronic, synthetic sound throughout most of the album. In “if this was a movie..” and “camera roll,” Musgraves’ vocals are altered to the point where they have an unearthly echo, which feels almost contradictory to her raw and emotional lyrics.

Although the album feels disorganized and ambiguous in style, Musgraves’ lyrics stand out. The songs are filled with authentic emotion, and the thought that went into the writing process is obvious. In “what doesn’t kill me,” Musgraves references her 2018 Grammy Award-winning album “Golden Hour,” saying “golden hour faded black.” The line is a symbol of the drastic difference in sound between the cheerful “Golden Hour” and the dark, messier “star-crossed.”

In “hookup scene,” Musgraves beautifully describes the lonely side of love, with emotional lyrics about desiring real connections that are seemingly unattainable nowadays.

The album is about more than heartbreak, though. In “simple times,” Musgraves reflects on the simplicity and low stress of childhood, reminiscing on when things were easier – a relatable track for almost any listener.

However, the album closes on a brighter note with the second to last song, “there is a light,”  conveying an uplifting message about finding happiness and letting it shine.

Closing out the album, Musgraves covers the famous Chilean Violeta Parra’s “gracias a la vida,” which translates to “thanks to life.” It’s an unexpected ending for the album, and yet, the message ties everything together — love, heartbreak, confusion and happiness. Musgraves thanks life for all it has given her and inspires listeners to do the same.

While this album is far from what Musgraves’ fans may have been expecting, it reveals a different side of the artist to listeners. It strays far from her roots and sounds, perhaps, a little too futuristic and disorganized for some listeners. Nonetheless, the album was excellently written, and Musgraves never fails to prove her true vocal abilities on her tracks.