Too young to remember: Students reflect on 9/11 on 20 year anniversary 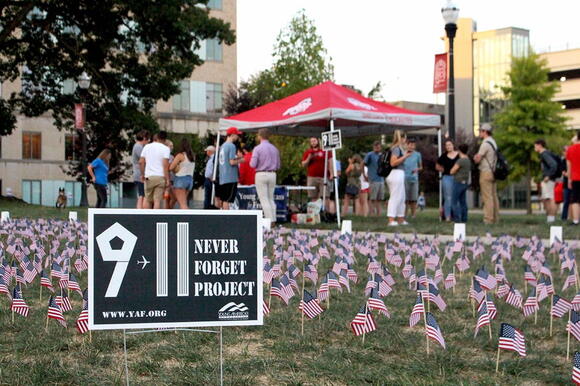 The Young Americans for Freedom plant 2,977 flags each year for those who lost their lives on 9/11. Credit: Courtesy of Alek Kundla

As one student calls and comforts a survivor, another might plant American flags in the ground or reflect with complicated feelings of disillusionment on the 20th anniversary of the 9/11 terrorist attacks.

Learning through secondhand accounts and living through a changed America, students faced the reality that they can never forget a tragedy they didn’t live through. Too young to experience 9/11 themselves, they were left to piece through the aftermath as they grew up and discovered how the event continues to affect the country two decades late r.

“When I first learned about it, and when a lot of people first learned about it, you look at this as being a tragic event, something sort of akin to, kind of like a natural disaster,” Aleksei Kundla, a fourth-year in computer science engineering, said. “Two thousand nine hundred seventy-seven innocent victims died on this day, and this is really terrible. Over time, you learn about the effects on our nation.”

Jordan Griffith, a third-year in air transportation, said he can’t remember the attacks, but they still impacted his life and loved ones. Griffith was born in New York City and was 6 months old when his grandmother escaped the north tower from about 20 floors up, he said.

He said he visited ground zero with his grandmother and mother in 2011 and looked at the memory pools and the names of the victims at the newly constructed memorial. It was an emotional moment for his grandmother, Griffith said.

Even 10 years later, he said his grandmother said she could still faintly smell the same burning in the air.

“I learned a lot,” Griffith said. “It really gave me more perspective on what happened, especially seeing some people’s family members there and their specific name on the edge of the pool.”

While he understands some young people or non-New Yorkers might not have a personal connection to 9/11, Griffith said he hopes others will respect and appreciate those such as he and his family who were touched by the tragedy.

Dalal Shalash, a second-year in philosophy, politics and economics, said although 9/11 is a significant moment in the past, it feels like any other event that occurred outside of her lifetime.

“In my mind, it’s always been this historical, tragic event, but no different than World War II or something along those lines,” Shalash said. “It doesn’t feel like it happened 20 years ago to me.”

Shalash, who is a Muslim, said her view of 9/11 is “flipped,” first living through the aftermath and hateful retaliation against Muslims and then learning in-depth about 9/11 during high school.

“That was impactful and hurt so many people in so many different ways, but we didn’t experience that, you know,” Shalash said. “It felt like somehow this became an attack on me, and I wasn’t even around to experience the actual attack.”

Balancing the discussion of the rise in Islamophobia — the dislike or prejudice against Islam or Muslims — while also honoring victims and their families is difficult, Hadeel Ahmad, a third-year in health and rehabilitation sciences , said. She said she usually avoids talking about 9/11 because thousands of innocent lives were lost due to an Islamic terrorist group and she feels people around her view her as different while categorizing her as a “terrorist.”

“It’s hard to find a middle point where you can say how it’s affected you without taking it away from the people who have actually been affected like the victims, the people who lost their lives and family members,” Ahmad said.

Even before Shalash learned what the World Trade Center was in high school, she said she knew that September was a time when hateful comments escalated. She said her worst experience growing up was in sixth grade on 9/11, when a student whispered that they should “stay away from Dalal.”

Despite not being much different from her classmates, Ahmad said she experienced traumatic and hateful moments while growing up, like having her hijab — a head covering worn in public by some Muslim women — ripped off her head at a waterpark.

“I didn’t understand what it had to do with me,” Ahmad said. “I was born and raised here, so I felt like all of the students around me.”

Ahmad said her hijab, foreign name and features make her “a walking representation of Islam.” She said that although she sometimes feels scared when she’s walking alone or when she reads about hate crimes against Muslims happening in the media, she’s proud of her beliefs.

“I always take pride in who I am and what I believe in, especially my religion,” Ahmad said.

Chandler Rupert, a fourth-year in political ecology and president of Students for a Democratic Society, said he sees a connection between current affairs and post-9/11 politics and military intervention in the Middle East.

Rupert was born in 2002 and first learned about 9/11 in school. As he got older, he said he did his own research on the attacks and the government response, reshaping his views, gaining insight and recontextualizing the event.

“I thought a lot of the specific details of the attack were correctly taught to me, but the broader context in which it existed was completely taught incorrectly,” Rupert said. “I’ve had to work that out independently.”

Rupert said he saw the U.S. government justify their political agenda with invasions in the Middle East with the 9/11 attacks, creating an “us-versus-them” culture in America against Muslims and Middle Easterners.

“All of United States politics within my life has been defined by this event that I wasn’t alive for,” Rupert said.

Kundla, public relations chair of Young Americans for Freedom, said he remembers his mother explaining why the U.S. was at war in Afghanistan after reading a newspaper, marking the first time he learned about 9/11. He said he was a little over a year old when the attack happened.

Kundla said over time, he understood the broader significance of 9/11. He said the attacks are widely remembered not only because there were so many lives lost, but also because the attackers aimed at symbols of American economic, military and political power.

“This was an attack on the soul of our nation,” Kundla said. “The people who attacked us, they attacked us because they hated our values.”

Young Americans for Freedom annually host their “Never Forget” project on Sept. 11, planting 2,977 American flags for victims, Kundla said. This year for the 20th anniversary, the project will take place in Remembrance Park by the Ohio Stadium from 8 a.m. to 8 p.m.

With the project right next to the ‘Shoe during a home game, Kundla said those passing by are welcome to plant a flag in remembrance.