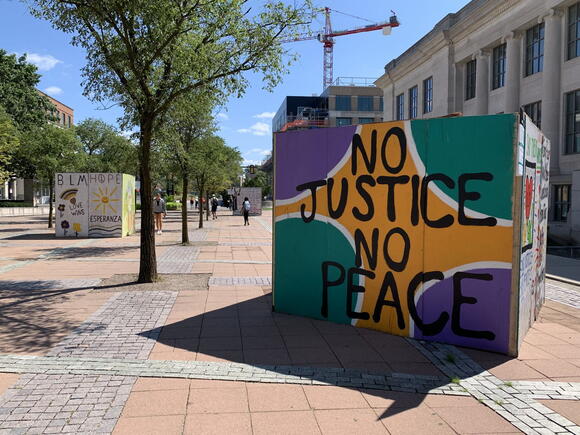 The #ArtUnitesCbus mural installation found in the plaza outside of the Wexner Center for the Arts. Credit: Courtesy of Morgan Gibbs

The vibrant murals that once decorated the windows of Columbus storefronts during the 2020 Black Lives Matter protests now stand across the city as powerful symbols of hope, love and unity.

Beginning in August, the second round of #ArtUnitesCbus exhibitions , a Black Lives Matter public art initiative, went on display in various locations across the city. Created in June 2020, the murals painted by artists on plywood sheets used to cover the windows of Columbus businesses during summer protests have been given a second life through temporary installations on display through the end of the year.

“We realized we had this amazing collection that was a snapshot of a moment in time that was going to be a critical part of our country’s history,” Jami Goldstein, spokesperson for the Greater Columbus Arts Council, said. “We felt that we had a moral obligation to do something to help these messages continue, to spur dialogue and to bring our community together and bring people along in the anti-racism fight.”

#ArtUnitesCbus began as a small initiative by the GCAC and the Columbus Association for the Performing Arts, commissioning artists to paint over the plywood sheets covering the broken windows of the GCAC office and the Ohio Theatre. It quickly grew into a citywide effort with more than 200 murals spread throughout Columbus, according to the GCAC website .

As the murals began to come down in March, Goldstein said the GCAC felt it had a responsibility to preserve and display the work. She said they had the murals professionally photographed and exhibited at nine different venues last fall. They are also available at another four venues and locations currently.

“We want the dialogue to continue,” Goldstein said. “We want people to be talking about it and we want them to support it. If we can get more people who can see these positive messages of hope and love and unity, I think that’s the kind of thing that spurs us to keep fighting the good fight.”

The mural installations can be found at several locations on Ohio State’s campus, including Thompson Library, the Wexner Center for the Arts and the Hale Black Cultural Center, according to the #ArtUnitesCbus website . They can also be found across the city at the Columbus College of Art & Design’s Beeler Gallery, the Columbus Metropolitan Library’s Carnegie Gallery and the Fort Hayes Metropolitan Education Center.

Goldstein said the installations at these locations are free to view, highlighting the #ArtUnitesCbus initiative’s commitment to keeping these murals and their messages accessible to everyone.

“The arts help us come together as a community and they help spur dialogue,” Goldstein said. “The more free opportunities we can share with everyone, the more accessible we make all forms of art.”

Melissa Starker, creative content and public relations manager for the Wexner Center for the Arts, said the center chose to display the mural installations outside in its plaza to increase access to the art and its message.

“It harkens back to the original intent of the work, which is that it was something people could just walk up to and find, without even knowing in advance that it was there,” Starker said. “Anyone who happens to come across this can see it, and can see the work that went into it, and the passionate emotion that fuels it.”

Much of the Wexner Center’s work focuses on the idea of generating conversation and asking questions, Starker said. She said the center was excited to feature something as unique and thought-provoking about social justice as the murals, especially as Ohio State students return to campus.

“It’s not in the headlines every day in a way that maybe it was in the summer of last year, but these are issues that are still pressing and still unresolved,” Starker said. “I think they’re part of even the Wex’s, and also Ohio State’s, goal of helping to create a more informed global citizenry.”