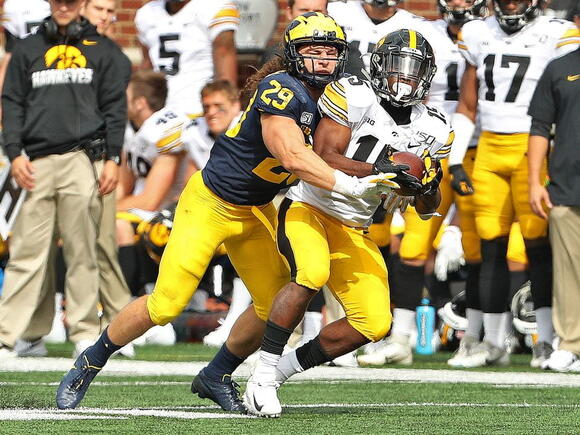 Michigan linebacker Jordan Glasgow (29) tackles Iowa running back Tyler Goodson (15) as he catches a pass in the fourth quarter of their Big Ten football game at Michigan Stadium in Ann Arbor, on Saturday, October 5, 2019. Michigan won the game, 10-3, and improved to 4-1 on the season. Credit: Mike Mulholland via TNS

After starting 2020 0-2, Iowa head coach Kirk Ferentz rallied his troops to finish the year on a six-game winning streak, outscoring opponents 214-83. It was much of the same in Iowa City Saturday when the No. 18 Hawkeyes trounced No. 17 Indiana 34-6, getting a huge boost from their defense whose three interceptions turned into 17 points.

There are two players who touch the ball every play: the center and the quarterback. Iowa’s junior center Tyler Linderbaum anchors the Hawkeyes’ offensive line, serving as the conductor of the unit. There aren’t many numbers for Lindenbaum himself to flaunt, but it is reflected in the rest of the offensive production. Quarterback Spencer Petras was on his back just 11 times in 2020, good for the third-lowest total in the Big Ten. Junior running back Tyler Goodson has the potential to earn 2021 Big Ten Running Back of the Year honors, hoping to build off his 762-yard 2020 season that was good for third-best in the Big Ten. The 6-foot-3, 290-pound unit up front has the ability to move defensive linemen, open lanes on the ground and is a plus pass protector. ESPN NFL draft insider Todd McShay ranked Lindenbaum the 15th-best prospect in his preseason rankings of the top 50 prospects for the 2022 NFL Draft.

Senior defensive back Riley Moss outscored Indiana by himself Saturday, returning two interceptions for touchdowns. The first tipped off the hands of Indiana graduate wide receiver D.J. Matthews Jr., gifting Moss the pick before jumping a second-quarter out route to stroll to the end zone for six. He is no stranger to finding the ball, picking off two opponent passes a season ago — tied for ninth-most in the Big Ten. He also swatted down two of Indiana redshirt junior quarterback Michael Penix Jr.’s passes, which were tied for a team-high Saturday.

The difference between Iowa being a good team and a great team comes down to the play of Petras. They have the pieces in the backfield, on the offensive line and on defense, but Petras serves as the biggest question mark. In his first year under center, he passed for 1,569 yards, which was good for sixth-best, but his 9-to-5 touchdown-to-interception ratio was less than stellar for his eight starts. Against Indiana, the San Rafael, California, native was a game manager, going 13-for-27 for 145 yards. Despite the stigma surrounding Big Ten West offenses, Petras can elevate the Hawkeyes to posing the biggest threat to conference perennial powerhouse Ohio State if he can link with his receiving corps and drive the ball down the field.