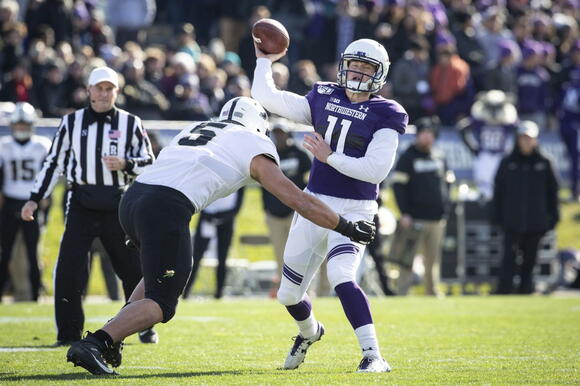 Purdue opened its 2021 season at home against Oregon State in Week 1, with the Boilermakers taking care of business against the Beavers 30-21. Junior quarterback Jack Plummer completed 29 of his 41 passing attempts for 313 yards and two touchdowns, and senior running back Zander Horvath rushed for 81 yards on 21 carries including an 11-yard touchdown run in the first quarter. Oregon State kept it close for the entirety of the game but Plummer’s 50-yard strike to junior tight end Payne Durham solidified Purdue as the victors in a competitive battle between two Power Five teams looking to build on disappointing 2020 seasons.

Junior wide receiver David Bell led Purdue in receiving yards in his first two seasons in West Lafayette, Indiana, and he is poised to have his best season yet. A former Big Ten Freshman of the Year in 2019, he opened 2021 with a big performance against Oregon State. Despite having no TD catches, he led Purdue in receiving yards going for 134 yards receiving on eight catches. Bell also earned Second Team All-Big Ten in 2019 and First-team All-Big Ten in 2020, so there is no doubt that Bell is going to be a top offensive weapon once again in 2021.

Junior defensive end George Karlaftis had a quiet game vs. Oregon State Saturday, but don’t get fooled by his unusual performance. Karlaftis is a two-time Second Team All-Big Ten selection in 2019 and 2020 and finished his freshman campaign with 54 tackles and 7.5 sacks, the latter being tied for first on the team. Karlaftis only played in three games in 2020 due to testing positive for COVID-19 and recorded four tackles and two sacks in limited playing time. If Karlaftis can stay healthy, he will be a force and a leader for the Boilermakers’ defensive line up front.

The last two seasons Purdue has been dreadful in the running game, finishing last in the Big Ten in rushing yards in 2019 and 2020, respectively. If the Boilermakers can improve their offensive line and create more running room for Horvath and company, then Purdue could be one of the best offenses in the Big Ten in 2021. Along with an underwhelming running game, Purdue struggled in 2020 with stopping the passing game on defense, giving up an average of 254.2 passing yards per game which was 12th in the Big Ten last year. Only Ohio State and Michigan gave up more passing yards per game than the Boilermakers last year and if Purdue can limit the big plays through the air in 2021, they have potential to become a sleeper team in the Big Ten West.