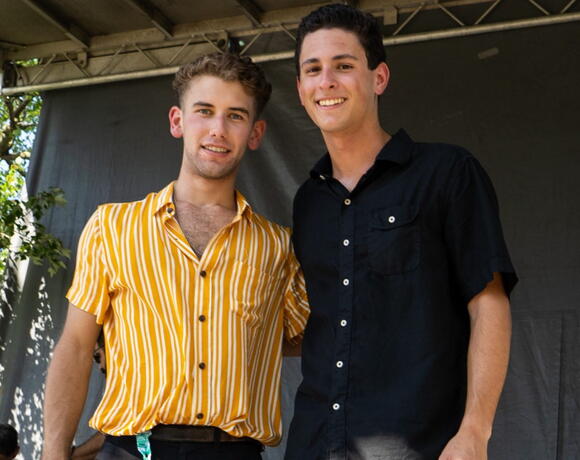 Corman, a fourth-year in operations management who goes by the stage name DJ Anto, and Harris, a third-year in marketing, teamed up in July to create their single “Thousand Degrees,” which is available on all music streaming platforms. In August, the pair performed together at WonderStruck Music Festival in Cleveland and WonderBus Music & Arts Festival in Columbus.

“I’m hoping we can definitely do some more in the future together too because I really like the way we work together,” Corman said. “It makes it fun when you’re working with somebody that you’re also friends with.”

Corman said he and Harris met through their fraternity and started collaborating after discovering a shared interest in music early last year.

“We sat down and he came to me with some lyrics and a little melody that he wrote,” Corman said. “He’s like, ‘Dude, this would be a really good song that we can make together,’ and we sat down and we cranked the entire song out, and that’s when we realized we might work really well together.”

“Thousand Degrees” is the first single Harris and Corman have released together. Corman said it was a joyous moment when the song finally came together.

“We were in our room dancing around, singing everywhere, like, ‘Oh my god, this is great,’ ” Corman said. “Like, we got something really good here.”

Harris said he has been writing and producing his own music with support from friends and family since high school. He said they were the ones who encouraged him to start releasing his music.

“My parents gave me a big nudge, and since then I’ve just been developing my production skills, my songwriting skills, guitar playing and then on top of that, playing live has really motivated me to improve and just write even more stuff,” Harris said.

Corman said even as a child he was interested in music, but he didn’t start pursuing his DJ career until he started college. He said he now works as a resident DJ at campus-area bars Midway on High and Ethyl and Tank, but his DJ career first jump-started when he decided he wanted an uninterrupted flow of music while walking around campus.

“On GarageBand, I started throwing together songs in a certain order so I wouldn’t have to skip songs, and some of my friends heard it and said, ‘Whoa, this is actually pretty good. Have you ever thought about maybe getting into DJing or music production or anything like that?’ ” Corman said.

Although Harris and Corman work together often, they said they have their own individual goals. Corman said he hopes to be a music producer, and Harris said he hopes to gain a larger following and continue to come out with his own music.

To connect with his listeners, Harris said he draws on universal themes of relationships and mental health challenges to pour emotion into his songwriting.

“If I’m writing a song about mental health, I want to be completely transparent, put it all out there so that whoever’s listening can feel like they have someone to relate to,” Harris said.

Being aspiring musicians, students and fraternity members isn’t always easy for Harris and Corman, and they said they often struggle to juggle it all at once. Harris said he sometimes struggles with writer’s block, but working with another artist has helped him push through it.

“I did notice that when I collaborated with somebody and when we write work together, we bang out a song in like four sessions,” Harris said. “It sort of opened my eyes to how crazy collaboration can be and how it can make the creative process flow a lot better.”