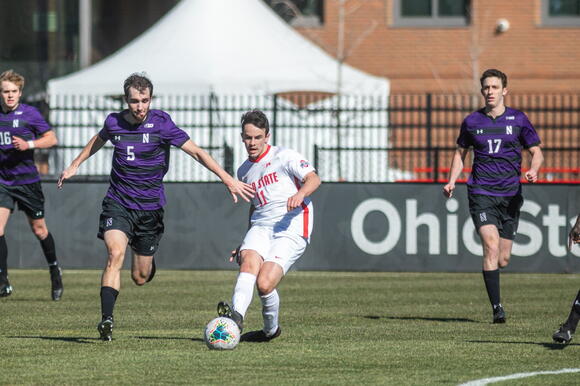 The Ohio State men’s soccer team left Bloomington, Indiana, without a victory in the IU Classic.

The Buckeyes (1-2-1) were unable to capture a win over the weekend as they struggled to convert shots into goals. On Friday versus Xavier (3-0), the Buckeyes lost 2-1 and found themselves in an overtime 1-1 tie with Creighton (1-2-1) Monday.

The Buckeyes were unable to capitalize on chances after winning the possession battle against the Musketeers. Ohio State had eight total shots compared to Xavier’s seven along with four more corner kick attempts.

After a scoreless first half between the Buckeyes and Musketeers, senior midfielder Xavier Green followed up a rebound to give the Buckeyes a 1-0 lead.

The Buckeyes’ lead was gone 77 minutes into the game. Xavier junior forward Karsen Henderlong scored from outside the box and sophomore midfielder Jerome Jolly slotted the go-ahead goal in the bottom right of the net, solidifying the 2-1 victory for Xavier.

It was a similar story on Monday when the Buckeyes faced Creighton, as both teams had issues finding the back of the net.

The Buckeyes were outshot by the Bluejays 13-8 and failed to score on their seven corner attempts.

Junior forward Channing Chasten scored his first career goal 32 minutes into the game after a deflection landed on his foot in the box, giving the Buckeyes a 1-0 lead going into halftime.

The Bluejays tied the game up 58 minutes in after freshman forward Manu Toledano scored off a cross from junior midfielder Dominic Briggs.

The game finished in a tie at 1-1 as no more goals were scored in the two overtime periods.

The Buckeyes will look to bounce back from a winless weekend on the road Friday against West Virginia at 7 p.m.