Football: ‘The wrong play:’ The truth behind Williams’ first-career touchdown 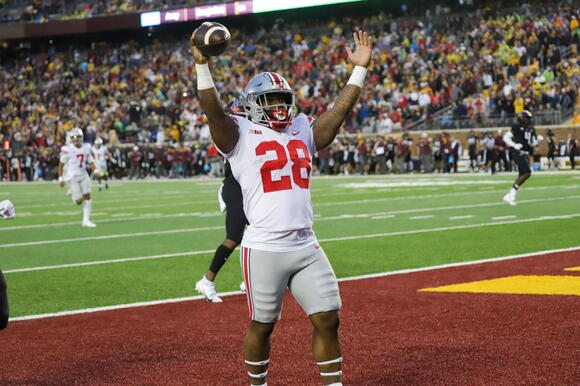 When No. 4 Ohio State’s offense trotted onto the field for its first drive of the 2021 season at Minnesota, many wondered just what the Buckeyes’ offense would look like with a new quarterback, an impromptu starting center and uncertainty abound.

But, a 71-yard touchdown run by redshirt freshman running back Miyan Williams capped the five-play drive. It seemed as though Ohio State’s potent offense wasn’t going to skip a beat.

“I thought that we came out on offense, that one drive, hit that big run, which was great,” Day said. “Jumped up early.”

But, truth be told, Williams said it was the wrong play.

Williams lined up on the left side of redshirt freshman quarterback C.J. Stroud in shotgun formation. When the ball snapped, Stroud handed it to Williams and most of the offensive line blocked to the left.

But, Williams hardly looked in that direction and found himself on an island with Minnesota junior cornerback Tyler Nubin. A brief, effective stiff-arm did the trick and Williams flew down the sideline to the end zone as Golden Gophers senior linebacker Mariano Sori-Marin chased behind.

Williams cashed in on his first-career score in scarlet and gray — but he said he didn’t want to stop there.

“It felt like a dream at first,” Williams said. “Then I was like, ‘I just got to keep going.’ It felt amazing, though.”

The Cincinnati native led Ohio State with 125 rushing yards on just nine carries, leading all players with an average of 13.9 yards per attempt. Williams’ 71-yard score was the Buckeyes’ longest rush since junior running back Master Teague III took a 73-yard carry to the house at Northwestern in 2019.

Interestingly enough, Williams didn’t rush again after that touchdown until there was 3:32 left in the second quarter. Ohio State began each of its next two drives with a combination of Teague and sophomore Marcus Crowley, and freshman TreVeyon Henderson.

Henderson also broke free for a 70-yard touchdown of his own, snagging a screen pass from Stroud and navigating through traffic for the first score of his Buckeyes career with 9:43 to go in the fourth quarter.

Despite not seeing action for more than a full quarter after his explosive run, Williams said he was fine with how the game plan unfolded. His priority, he said, was to get the win.

“I feel like that’s with everybody. If you get a big play, you will want to go back in,” Williams said. “But, I was really just like wanting to see everybody else play and how they play. I was just trying to get the win.”

As far as looking back at the play, Williams just smiled and said the team would fix it in practice.