Women’s Soccer: Buckeye captains help edge out a late comeback by No. 18 UCF 4-2 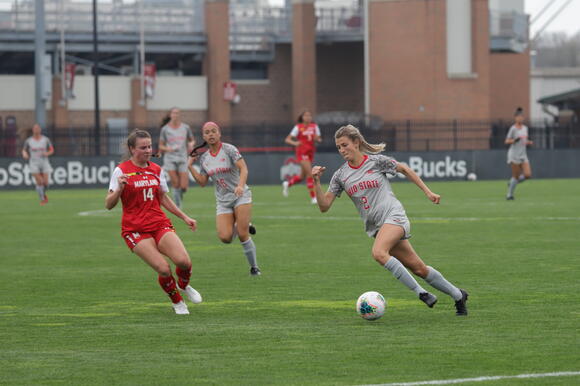 In the first half, the Buckeyes pushed the tempo well on the wings and defended well on the back line, jumping out to a 2-0 at half.

The first goal of the game came in just the third minute of play as senior co-captain forward Kayla Fischer beat two Golden Knight defenders in the box to find the back of the net.

“Sometimes it takes us awhile to get going so scoring right off the back definitely helped with our energy today,” Fischer said.

The next goal may have been the most impressive in the night, as senior co-captain defender Izzy Rodriguez curved a corer kick that found the back of the net for her first goal of the season.

“It was funny, I looked into the box, and I saw [senior midfielder] Talani [Barnett] behind the goalkeeper and she told me, ‘Try it,” Rodriguez said. “We had practiced it in scout, and I knew if I missed it Talani would be right there to clean it up.”

The Buckeyes scored again in the 50th-minute off a combined assist from co-captains Emaly Vante and Fisher to junior forward Emma Sears, who scored her fourth goal of the year.

Ohio State continued to control the game up until the 70th-minute of play where the Golden Knights flipped a switch and showed why they are ranked No. 18 in the nation.

Their first goal came off a corner kick from sophomore Katie Bradley as she curved the ball, splitting the Buckeye defense at the 70-minute mark, a goal similar to that of the Buckeyes’ Rodriguez back in the 33rd-minute.

In the 72nd minute, the ball bounced around in the box amongst many Buckeyes and Golden Knights, ending up in the goal following a touch by junior forward Ellie Moreno.

The Buckeyes put the game on ice in the 86th minute, as Sears found Fischer screaming down the middle of the field to give Fischer her fourth goal of the year.

Head coach Lori Walker-Hock was impressed with the way her team played.

“We did a good job following the game plan,” Walker-Hock said. “One part of that was putting the ball in the net, which we did good at.”

The Buckeyes next take on Navy at Jesse Owens Memorial Stadium Sunday at noon, rounding out their five-game home stretch.