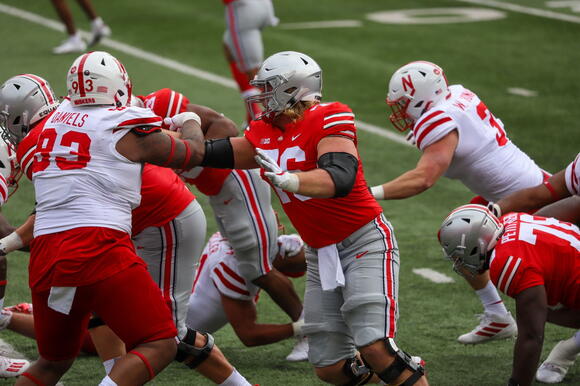 The Ohio State offensive line did plenty of shuffling throughout preseason camp.

Of the five potential starters, only one was not shifted away from their natural position: junior offensive tackle Dawand Jones. Both starting guards — sophomore Paris Johnson Jr. and graduate Thayer Munford — came to Columbus as highly regarded tackles.

In Munford’s, the Cincinnati native played tackle for four years in the Ohio State program, garnering national recognition and seeing his NFL draft stock rise throughout his Buckeye career.

With attention to his move to left guard, Munford said the change isn’t unfamiliar to him and will be beneficial for his future.

“It’s really not like a big, huge change for me,” Munford said. “It’s a better chance for me for getting ready for the next level. If I do this now, I can play wherever in the next level.”

Munford will share the left side of the field with Petit-Frere, who lined up on the opposite end of the line last season. Petit-Frere pointed to Munford’s work ethic as a driving factor for his seamless move to guard.

“Thayer is just an amazing competitor when it comes to his work ethic on and off the field, when it comes to film study and being a teammate, but also his impression on the field, how great he is in terms of technique-wise and knowing his plays and understanding different defenses and schemes like that,” Petit-Frere said. “Although he’s been playing left tackle for about four years and now switching to left guard, I feel like you’re still going to see great strides from him, in terms of him trying to play a new position.”

While Munford started 45 games at tackle for the Buckeyes, Johnson made the shift without a career start in the scarlet and gray.

Johnson arrived in Columbus as a five-star tackle out of Princeton High School and, in a similar vein to Munford, said the transition will make him a versatile lineman.

The man in the middle will be junior center Harry Miller, who shifted over from right guard last season.

Miller, who competed with redshirt freshman Luke Wypler for the starting spot, said he needed to retrain himself on how to be a center after spending time at guard.

“When you get to a high-level environment, a high-stress environment, I realized that there were a lot of technique things I had in the center position that I hadn’t made concrete,” Miller said.  “There’s definitely lots of nuances between the positions, but luckily I’ve had a year to be able to work.”

As the Buckeyes transition to the start of the season Thursday at Minnesota, Petit-Frere said the unit has created chemistry, despite all of the shuffling.

“We’re just comfortable picking the best five. That’s always been the mission for every single time we come out of a season,” Petit-Frere said. “That’s something that [offensive line] coach (Greg Studrawa) has always been proficient about making sure that we have an entire unit that’s ready to roll and play when their number is called, no matter who it was or what position it was or where they felt that they were at in terms of any type of depth chart. All that matters is that you’re ready to play when your number is called.”