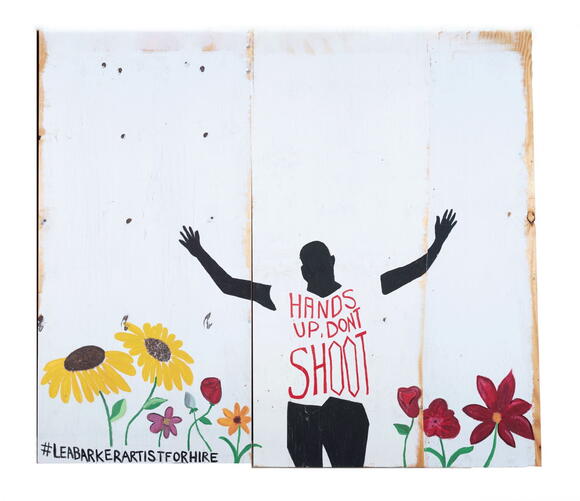 Three new exhibitions at the Columbus College of Art & Design’s Beeler Gallery aim to encourage conversation about how to move forward during uncertain times.

Beeler Gallery now features “Bianca Beck, Tamara Gonzales, Christina Forrer” by the three artists of the same name, “A Bridge to Uncertainty” by Johnathan Payne and “BLM,” a mural collection, all of which opened Aug. 23 and are free to view for the public, according to an Aug. 5 press release. The exhibitions are supported by the Greater Columbus Arts Council, which loaned out the mural collection, and the Ohio Arts Council, Tim Rietenbach, faculty director of galleries at the college, said.

The “Bianca Beck, Tamara Gonzalez, Christina Forrer” exhibition, running until Nov. 6, consists of 24 pieces of artwork, including sculptures by Columbus-born Bianca Beck, paintings by Tamara Gonzalez and tapestries by Christina Forrer. The exhibition raises the question of how people interact with one another and handle the space between their bodies, Greer Pagano, curator of the exhibition and an Ohio State alumnus with a Ph.D. in art history, said.

“I thought, you know, ‘Wouldn’t it be interesting to do a show that was about our longing for and fear of proximity and intimacy?’ ” Pagano said. “That is really the core of the exhibition. I think that artists allow us to have space for questioning and space for looking, and I wanted to create an exhibition that would help us look at these spaces and these bodies and get us to think about how we engage with one another in this really tumultuous time.”

Pagano said the exhibition is meant to resonate with the community and inspire Columbus residents and students.

“We all have a responsibility to understand one another, both physically and culturally,” Pagano said. “An exhibition isn’t going to fix anything, but it, I hope, would give us a moment’s pause to think about our place, among others, in our really tumultuous and scary world right now.”

Johnathan Payne, the featured artist of “ A Bridge to Uncertainty ,” is also the inaugural recipient of the Aminah Brenda Lynn Robinson Residency — named after a Columbus-based artist and CCAD alumna who has since passed, Rietenbach said. The exhibition will run until Oct. 2, featuring artwork Payne created while living in Robinson’s home and includes geometric compositions and paintings, according to the press release.

“His work is in a space by itself, and it’s really delicate,” Rietenbach said. “They cut paperwork and constructed, kind of, geometric patterns that are really complicated and very interesting and really engage the gallery walls in an interesting way and play with light and shadows.”

The third exhibition, “BLM,” showcases a collection of murals that were painted on plywood by various Columbus artists in the summer of 2020 during the George Floyd protests in downtown Columbus, Rietenbach said. Featuring more than a dozen of the over 200 #ArtUnitesCbus murals, the exhibition runs through Dec. 11 and looks to continue the conversation around racial inequality and injustice, with a hopeful message for the future.

“We ended up stacking them and kind of creating two really giant murals out of an accumulation of a handful of murals on each panel, and so it’s really a massive, big painting that we created out of it,” Rietenbach said. “They act as, kind of, this marker of that time period as well.”