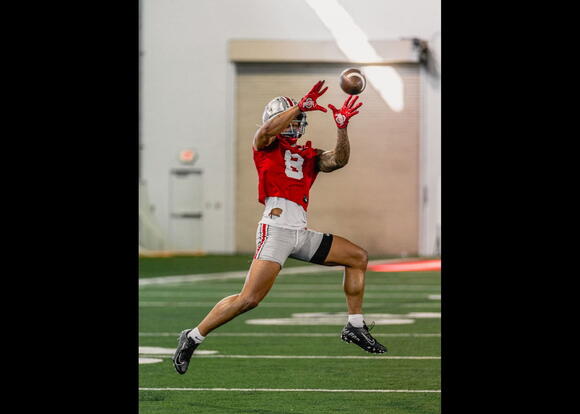 Over the last four years, wide receiver Kamryn Babb has made more than a handful of phone calls back home to tell his family unfortunate news.

Babb tore his ACLs a total of four times — twice in each knee — and his latest phone call came in the spring, this time from his right ACL buckling. Babb said he’s felt low for a long time because the tears have forced him to play in only seven games since joining the Buckeyes in the summer of 2018.

After the third tear, Babb said he had thoughts like, “It might be time to wrap [my career] up,” but his faith motivated him each time to not give up.

Just two weeks before Ohio State’s first game of the year, Babb’s dedication to himself and his faith proved true with another phone call home while the team practiced at the Pro Football Hall of Fame in Canton, Ohio. This time, he had good news.

The Buckeyes elected Babb as one of six captains for the 2021 season.

“I was definitely surprised, but very grateful and just thankful,” Babb said. “I’m thankful for all my teammates and coaches. It’s just an honor to hear all the names that have came before me. To be a part of this program and leave my mark in that way, especially not playing as much as I’ve wanted to play, leaving my mark off the field has been a blessing. I’m just very thankful for the opportunity.”

Head coach Ryan Day said one of Babb’s speeches to the team came a few weeks ago, discussing resiliency, and that Babb is the epitome of such strength. Day also added Babb’s journey is “one of the more amazing stories” he’s been around, and the now-senior has set a new standard.

“His impact has been left already on this program,” Day said. “I know he wants to leave a legacy, and this is an unbelievable way for him to do that. He could’ve walked away two or three different times and he hasn’t. He’s stuck with us. I’m just really happy for him and proud of him, of what he’s done already in this program.”

Babb came to Ohio State as a four-star recruit and earned a selection to the U.S. Army All-American Bowl.

Olave said seeing the adversity after growing close with Babb makes his story all the more unique. Olave noted Babb’s body language and not hearing a single complaint from him set an example for the Buckeyes.

“To see him come out a better person is what is huge to me,” Olave said. “It was tough for me, especially, being close to him, seeing him go through all that hurt and his family going through all that. Just to be there, that hand, always there, always positive, always smiling. People look up to him, even I look up to him. It’s huge for us and good for the Buckeyes.”

Hartline said Babb’s captain status represents the body of work that affected teammates not just on the football field, but far off of it as well.

“His work ethic has been off the charts. You don’t get elected to something like that if you don’t live the right way,” Hartline said. “I think that he’s a very consistent man that operates at a very high level academically, socially, spiritually. Kam just lives at that ultra, high consistent level of just being a great person and always finding value besides just catching a football, which is minimal.”

Once a top-100 player nationally as a prep player, and even running a leg on his high school state championship 400-meter relay team, Babb has proved to be a vital athlete when able to compete.

Babb credited Ohio State physical therapist Adam Stewart, who often goes by “Stew” among Buckeyes, for motivating him throughout injury rehab. He said the energy Stew brought helped him to not give up on himself.

The journey back onto the field for Babb has been arduous, and finally getting onto the field in 2020 was a sign that he may finally contribute. Despite his recent ACL tear, Babb said he still feels like he could perform on the field after another round of recovery.

“Nobody’s really been able to see what I know I can do and what I feel like I was coming into,” Babb said. “Again, that’s all praise and glory to God for being able to move and run and do the things I can still do. I do feel like I can still play at a very high level. I just want to be able to bring glory to him through that.”

Babb said he ultimately didn’t think becoming a captain at Ohio State was a possibility due to how sparse he’s played during meaningful competition. But, to many others around him, Babb’s leadership has been as meaningful as any touchdown or big play.

He gave acclaim to his ability to lead vocally on the sidelines and serve as a source of support for his teammates and thinks he’ll be prepared for what lies next, despite not knowing what his chapter after Ohio State may look like.

Remaining true to the process has been key for Babb to remain headstrong throughout each battle with injury or adversity. Now, he said he’s confident in stepping into any challenge for anyone with his firm trust in faith.

“I’m just grateful to just be alive and be able to run and do everything still because there’s so many people I know out there that can’t run or walk,” Babb said. “Life is way bigger than football, so I just want to be a light.”