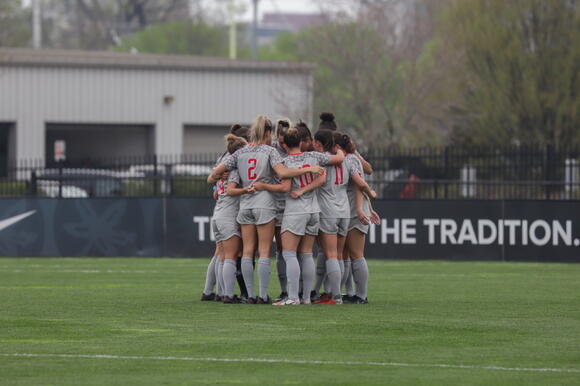 After back-to-back wins to open its five-game home stand, Ohio State women’s soccer was unable to extend its winning streak to three Sunday.

In a highly-anticipated matchup against No. 2 North Carolina (3-0), the Buckeyes (2-2) created plenty of offensive opportunities but were unable to capitalize, falling 2-0.

Although the Buckeyes were held scoreless, head coach Lori Walker-Hock — who won four national titles with North Carolina as a goalkeeper —  was proud of her team’s aggressiveness against the Tar Heels.

“I think we played fantastic, to create that many chances on that team with their depth I think is a credit to where our program is headed,” Walker-Hock said.

The first goal of the game came in the 16th-minute when North Carolina sophomore forward Avery Patterson’s shot bounced off the gloves of Ohio State senior goalkeeper Bailey Kolinski and trickled into the net.

Ohio State pushed the tempo and applied pressure against the North Carolina defense for the remainder of the first half.

The Buckeyes tallied 12 total shots with seven of them being on goal. However, none could find the back of the net, finishing the half down 1-0.

The next score of the game came in the 50th-minute when North Carolina capitalized with good ball movement to score off the foot of senior forward Rachael Dorwart.

North Carolina dominated possession for the remainder of the second half and kept the Buckeyes at bay, making them play their type of game until the finish.

This was the seventh meeting all-time between North Carolina and Ohio State, and the Tar Heels have won all seven dating back to the series’ first match in 1994.

Although the loss pushes the Buckeyes back to .500, Walker-Hock said she is optimistic for the rest of the season.

The Buckeyes return to the Jesse Owens Memorial Stadium pitch Thursday against UCF at 5 p.m. on BTN+.