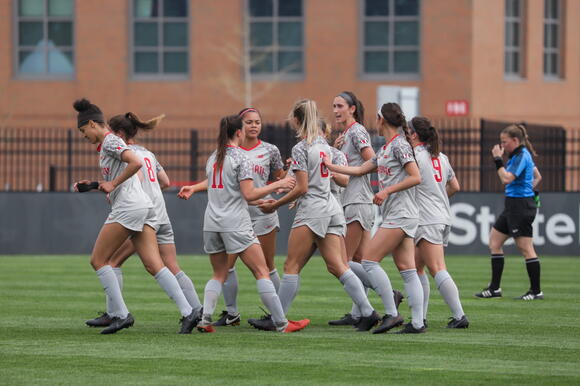 Although Ohio State found the goal in the first 30 seconds of its last match against Akron, it took more than a half for it to find the net again against Bowling Green.

The Ohio State (2-1) offense found its groove in the second half — scoring three goals — to lift the Buckeyes past the Falcons (0-3) Thursday.

Despite the score being 0-0 at halftime, there was not a lack of action as the Buckeyes tallied 13 shots with just one on goal.

Walker-Hock also stressed the support of the midfield and the movement of wide forwards as keys to the second half, when Ohio State scored three times and never looked back.

The first goal of the game came in the 54th-minute when sophomore midfielder Kine Flotre curved a corner kick as senior forward Kayla Fischer leaped into the air to head the ball in against former Ohio State goalie, now a redshirt junior at Bowling Green, Lili Berg.

“My coach Brian [Jankowski] told me to get my head on the ball and score, and I said, ‘Well here goes nothing,’” Fischer said.

Bowling Green answered back off the foot of sophomore forward Lacee Bethea after a cross into the box from junior midfielder Katie Cox just over two minutes later.

The next score came in the 77th-minute as Fischer set up sophomore forward Chloe Delyser in the box for a goal.

Almost immediately after, Delyser and teammate junior defender Kitty Jones-Black set up Fischer for her second goal of the night in the 78th-minute.

Fischer finished the game with eight shots, two goals and one assist and Delyser finished with two shots, one goal and an assist.

The Buckeyes outshot Bowling Green 28-8, putting seven of those shots on goal.

In its next match, Ohio State takes on No. 2 North Carolina at Jesse Owens Memorial Stadium Sunday at 1:30 p.m. on Big Ten Network.