Football: Fleming becoming the receiver he wants to be following shoulder surgery 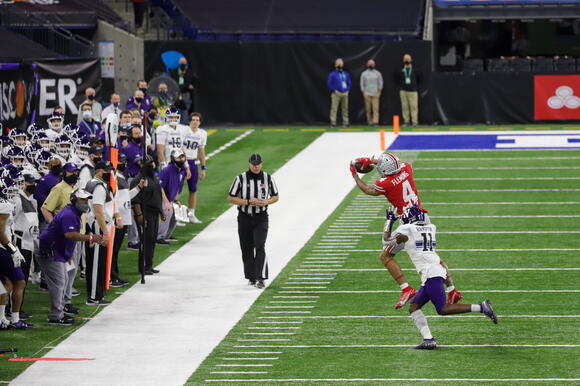 A plethora of accomplishments built expectations for sophomore Julian Fleming when he arrived at Ohio State in 2020: five-star recruit; the nation’s top-ranked wide receiver; a finalist for the Gatorade National Player of the Year.

But a nagging shoulder injury and no preseason camp due to the pandemic spun much of what could’ve been into lost experience and learning.

Fleming still played in seven games during his first season, but the returns of full spring and preseason practices in addition to summer workouts this year have allowed him to make the strides he wanted to take as a Buckeye.

“I feel like right now I’m 10 times better than what I was in high school,” Fleming said. “All those outside people that said this, this and this about recruiting. It is an honor in high school, but once you get to college, all your stars are gone and you’re starting from the beginning.”

The Pennsylvania native said the start of his shoulder issues began in eighth grade and he battled through it during high school. Throughout his first collegiate season in 2020, Fleming wore a brace that he said limited his range of motion.

He said last year was the final straw and sought a fix, crediting the Ohio State training staff for a quick and easy recovery.

“It was actually really weird at first because I had walked in the training room to get the brace on after I had been cleared and they’re like, ‘You don’t have to wear it anymore,’ ” Fleming said. “Now just being able to have full range in motion all the way above my head, extending out all the way and not having to keep me stuck inside, it’s a wonderful feeling. It hasn’t been this way in a while, so I’m just excited.”

Fleming said he’s eager to showcase his skill set as he enters his second season and that last year was a bit of a rude awakening. He said he’s undertaking a positive mindset and a ready-to-work attitude.

“I feel like I came in as just, like, a raw athlete,” Fleming said. “At this point, I feel like I’m transitioning into the wide receiver and not just the athlete whose god-given talents have put him above people.”

Route running and little details are two areas where the 6-foot-2 receiver said he’s improved the most since high school. Fleming noted that finding landmarks and beating a defensive back who applies tight pressure have been challenges, pushing him to find ways to improve.

Wide receivers coach Brian Hartline liked what he saw from Fleming in 2020, even mentioning his special teams contributions. Hartline said he’s happy that Fleming’s shoulder is feeling normal and that he’s seeing the impact the second-year Buckeye is making across the room.

“He just runs around like a freight train and just has been doing a great job,” Hartline said. “Him being able to clean that shoulder up and play basically healthy for the first time in the last three years, you can tell he’s just gaining momentum, which has been awesome.”

Momentum may be key for Fleming as he competes for his share of snaps in Ohio State’s highly-touted wide receiver unit. Both senior Chris Olave and junior Garrett Wilson placed on the Biletnikoff Award watch list, given to the most outstanding FBS receiver.

That’s not even mentioning the acrobatic skills of sophomore receiver Jaxon Smith-Njigba, or incoming freshmen Jayden Ballard, Emeka Egbuka — the top-ranked receiver from this year’s recruiting class — and Marvin Harrison Jr., who is the son of Pro Football Hall of Famer Marvin Harrison Sr.

Fleming’s health and year of experience could serve as the factors needed to help him achieve the status of the next great Buckeyes receiver.

The 205-pounder turned it on down the stretch of last year, even forcing a fumble on an interception against No. 11 Indiana and hauling in career-bests of four receptions for 53 yards against No. 14 Northwestern in the Big Ten Championship game.

Fleming said he felt he was continuously getting better as the 2020 season wore on, and his effort is one thing he can control so that favorable outcomes happen.

Healthier and reinvigorated, Fleming is eager to drown out the outside distractions and expectations so he can capitalize on the opportunities he dreamed he’d reach.

“I’m very motivated just to get out there and show what I’ve improved on,” Fleming said. “It’s going to be different now with a fully operational shoulder. I’m just excited, to say the least. I don’t know if there’s any extra motivation, but I’ve just been trying to work my butt off in any way I can.”