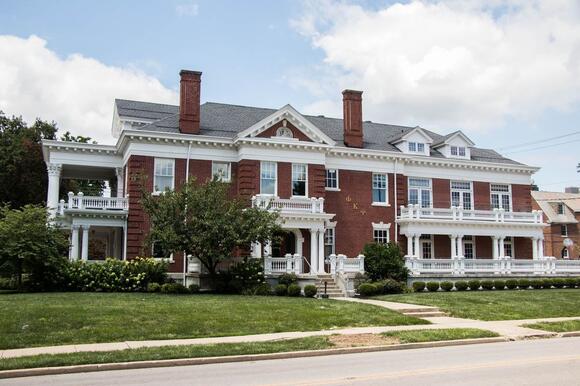 The national headquarters of Phi Kappa Psi placed an advertisement in the Back-to-School edition of The Lantern Tuesday stating it does not recognize the Ohio State chapter. Credit: Jack Westerheide | Lantern File Photo

The national headquarters of Phi Kappa Psi wants Ohio State students to know that it doesn’t have an active chapter on campus and that any students who say they are members of the fraternity will face legal action if they continue to do so.

Phi Kappa Psi lost its status as a registered student organization at Ohio State June 12, 2018, for hazing and endangering behavior violations of the Code of Student Conduct, according to Office of Student Life records. The national office placed an advertisement in the Back-to-School print edition of The Lantern Tuesday stating it does not recognize the Ohio State chapter of the fraternity.

In an email, Phi Kappa Psi reported that it placed the ad after it learned students were operating under its name.

“ We are committed to upholding the name of our organization at Ohio State and are prepared to take legal action against any students who use the name and/or likeness of our organization without our permission,” the headquarters said in an email. “We maintain contact with the Office of Fraternity and Sorority Life at Ohio State and appreciate their continued partnership during our chapter’s suspension.”

The advertisement stated individuals should inform Sorority and Fraternity Life or contact phikappapsi.com/contact of any student acting in the name of Phi Kappa Psi.

“Done well, a fraternity experience can benefit the individuals who are part of the group, as well as the community around them,” the advertisement stated.

Hunter Hartwig, assistant director of Sorority and Fraternity Life, said student safety is the primary reason behind a message about a closed fraternity.

“It’s really because these students who are acting as members of this unrecognized group are typically not following any of the risk management policies that a recognized community has in place to keep their members and their guests safe when they are hosting social events, especially those social events with alcohol,” Hartwig said.

After its initial suspension, Phi Kappa Psi was placed on disciplinary suspension through Aug. 7, 2022, with “educational programming sanction required before and during return to campus.” Any such student enrolled at Ohio State upon the chapter’s August 2022 reinstatement will not be welcomed into the organization, the headquarters stated.

According to a Feb. 25, 2018, incident report form, a student detailed how he and other pledges of the fraternity were blindfolded and taken to separate rooms where they were berated by current fraternal brothers and told to eat things off the ground and perform other demeaning acts.

This incident report followed previous Code of Student Conduct charges against Phi Kappa Psi throughout 2017 and 2018, including endangering behavior, hazing and alcohol.

According to the Code of Student Conduct , endangering behavior is defined as “taking or threatening action that endangers the safety, physical or mental health, or life of any person, or creates a reasonable fear of such action.” Hazing is doing, requiring or encouraging any act in relation to any initiation, continued membership or participation that causes or creates a risk of causing mental or physical harm, or humiliation.

An alcohol violation is defined as “use, underage intoxication, production, distribution, sale, or possession of alcohol in a manner prohibited under law or applicable university policy or facility policy,” according to the Code of Student Conduct.

An appeal by Phi Kappa Psi listed in the report stated the chapter did so on the basis of “serious procedural error that resulted in significant and material harm to our organization.” The chapter claimed an inability to examine the witnesses against them, insufficient evidence, failure to prove PKP affiliation with the alleged acts. The chapter stated the case should be dismissed and the proposed penalty was disproportionate to the alleged Code of Student Conduct violation.

“We are receiving serious financial damages as a result of the flawed suspension against us,” previous members of the fraternity stated in the report. “This primarily includes the displacing of 40 to 50 students who suddenly need to find housing this late in time, as well as hundreds of thousands of dollars of lost revenue. It includes lost membership dues, alumni contributions, and scholarships.”

In October 2020, an altercation at a party outside the suspended Phi Kappa Psi fraternity near East 14th and Indianola avenues turned fatal when Chase Meola, a fifth-year in marketing from Mahwah, New Jersey, was shot by Kintie Mitchell Jr.

Meola was welcomed as a new member of the fraternity in 2017, according to The Buckeye Phi Psi newsletter from 2017 .

The Phi Kappa Psi warning marks the second time at Ohio State that a national office has threatened to sue students who claim affiliation with a suspended fraternity chapter.

In March, the Sigma Alpha Mu international fraternity headquarters sent a survey about reporting underground fraternity members to the Greek life community to prevent any unofficial members from rejoining when the chapter’s suspension lifts in fall 2022.

Hartwig said he thinks there is a trend of national chapters reaching out to universities in an effort to end unrecognized activities beyond Ohio State, prevent usage of name and logos by these former fraternity chapters and keep students safe. He said suspended fraternities are typically provided a date upon which they are allowed to return to campus.

“They want to make sure that they’re doing everything that they can to be good partners so that when that day comes, that the university says, ‘Yes, this group worked really hard with us to make sure that activity was hopefully lessened or eradicated,’” Hartwig said. “Then, they are hopefully going to bring back an organization that is healthy, safe and going to provide a great fraternity experience for any student looking to join.”