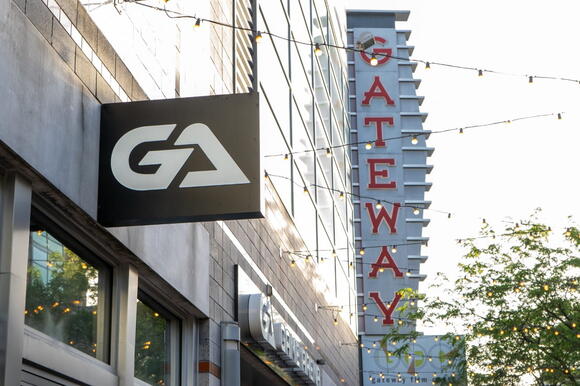 Game Arena, a Gateway easter egg, has leveled up and made its presence official.

The new gaming center, restaurant and bar offers a multifaceted gaming and dining experience to patrons, with a wide array of gaming options and one-of-a-kind food items such as Texas toast grilled cheese and ramen dogs. Operating at half capacity since its soft opening in April, the gaming center celebrated its official grand opening Aug. 12, just in time for the college crowd.

“We’re definitely making sure that everyone feels the environment and the community that we’ve really worked hard on nurturing at Game Arena,” Lyndsay Bamberger, marketing manager for Game Arena, said. “Especially with the OSU campus being so focused around social, kind of that college life.”

Game Arena has kept up with what’s big in the gaming world, offering popular esports events, “Tetris World Qualifier,” “Pokemon Go” and multiplayer games such as Rocket League and Overwatch for people to engage in, Justin Kogge, CEO and owner of Game Arena, said.

“There’s normally a cash prize, and you get to see some of the best talent in the region come out,” Kogge said. “The energy when everyone’s playing and the competition’s going is electric, and it’s just so much fun.”

Bamberger said the grand opening carried on into the weekend and featured activities such as T-shirt giveaways, raffle drawings and happy hour deals for draft beers and specialty cocktails such as the T-Spin, which Kogge said was Tetris-inspired.

In addition to providing esports and game-themed food and drinks, Kogge said Game Arena has new racing simulators and a gaming system called the Polycade, which contains a plethora of games — ones even gaming novices would recognize.

“It is a modern arcade cabinet that has all of the games in it,” Kogge said. “You can just walk up and play, even if you don’t like video games.”

Kogge said Game Arena saw a huge uptick in customers throughout June and July when COVID-19 restrictions began to relax. But with concerns over the Delta variant, he said they have had fewer customers coming in over the past several weeks.

Despite the decrease in attendance seen during early August, Bamberger said there has been a recent increase in attention on social media for the new location as students move back to campus.

“I will say that social media in the past, like, week or two weeks, there have been a lot of college students finding us by Geotag because they are looking for bars or activities,” Bamberger said.

Bamberger said as more college students begin to come through its doors, the gaming center will continue to prioritize the health of its patrons as well as its staff.

All staff members are required to wear masks and sanitize computers, and guests are seated six feet apart from one another.