Safety tips and resources for the new semester 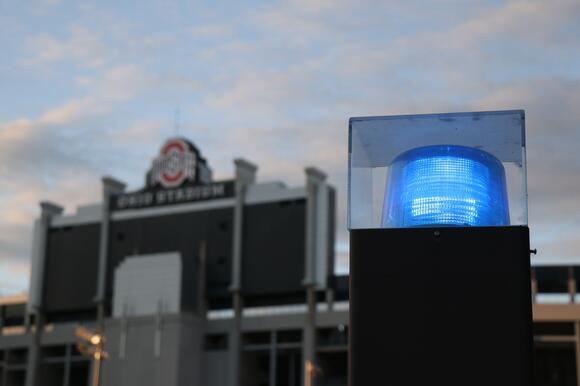 As students arrived back on campus for fall semester there has been a rise in neighborhood public safety notices with six of them being sent out alone in August. Credit: Jack Westerheide | Lantern File Photo

With the new semester underway and multiple recent crime reports in the university area, Ohio State offers a range of safety resources to keep students safe.

In August alone, there have been six neighborhood notices informing Buckeyes of crimes in the area — compared to one issued August 2020, according to the Department of Public Safety’s website . University spokesperson Dan Hedman said in an email the university partners with the city of Columbus to address crimes in the area, but students should also avoid traveling alone, and everyone has a role in supporting a safe community.

“Be aware of your surroundings and remove earbuds and headphones when walking, especially late at night,” Hedman said.

He said the university provides various safety-oriented resources for students, such as the CABS buses, Lyft Ride Smart at Ohio State and the free Rave Guardian app.

In the fall of 2020, Ohio State started a University Task Force on Community Safety and Well-Being that is “improving communication, engagement and support of residents on campus and in the near-campus neighborhoods,” according to the Office of Administration and Planning website .

Hedman said in addition to previously established resources, the university and task force are working to improve safety in other ways — including increasing community crime patrols, improving lighting off campus and expanding surveillance coverage in the off-campus areas with the addition of nine cameras since fall 2020.

Rave Guardian is available to students via the Ohio State app. It allows students to select friends to follow them with GPS, and it alerts these “guardians” if they do not make it home on time, according to the Department of Safety website .

Lyft Ride Smart at Ohio State is available inside the university-designated service area from 9 p.m. to 7 a.m., according to the Transportation and Traffic Management website . There are 10,000 discounted rides available on a first-come, first-served basis each month. Lyft’s normal service rates will return for the remainder of the month once the discounted rides are exhausted.

Ohio State also offers resources for off-campus students , such as free window and door alarms, among other apartment safety devices, at the Ohio Union, according to its website .