Football: ‘Teammates are making each other better’: Running backs sharpen through competition 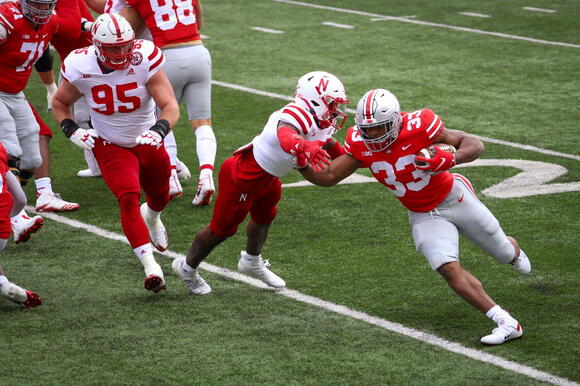 In the 2020 campaign, the Buckeyes’ rushing attack was led by dynamic running back Trey Sermon, with added production from then-sophomore running back Master Teague III.

As Sermon now chases his NFL dream with the San Francisco 49ers, Teague finds himself engaged in a competition for the starting running back spot. As the veteran in the running back corps, Teague emphasized the importance of having competition to push him and the rest of the room to improve.

“Teammates are making each other better –– that’s all you could ask for,” Teague said. “I appreciate the competition. We’re brothers. We know we’re going to do what’s best for the team. We’re just looking to do that, no matter how that looks.”

Pushing Teague for the starting spot is a group of young and talented ball carriers, headlined by redshirt freshman Miyan Williams. 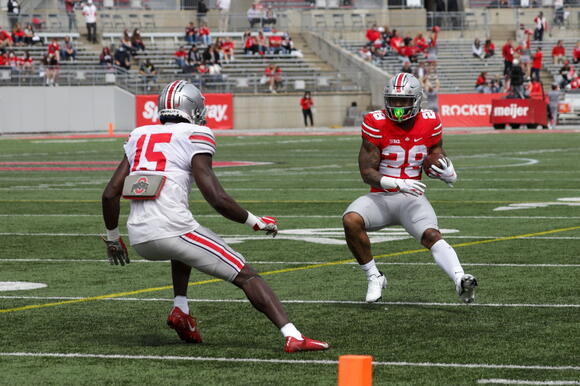 Sporting the nickname “pork chop,” Williams has spent time with the starting offense throughout preseason camp. Chasing Teague for reps, Williams said he needed to make adjustments to his game based on his freshman season with the Buckeyes.

“In the offseason, I stretched a lot when I was training back at home. Got my speed up a little bit. I feel lighter. I feel better than last year. I just feel loose, more loose,” Williams said. “Last year, it was tough –– freshman year –– everything was just going by quick. I just tell myself to just keep working: just come in here and put in work every day like everybody else does.”

Although Williams was unable to find the field much in the 2020 campaign, the Cincinnati native produced in his limited role. Williams rushed for 64 yards on 10 attempts in his four appearances, including a 21-yard performance on three carries against Clemson in the Sugar Bowl.

Although Crowley dealt with knee injuries during his time at Ohio State, running backs coach Tony Alford said he’s done everything he’s needed to stay on the field.

“I haven’t seen any ill effects, none whatsoever,” Alford said. “His attitude has been fantastic. He’s gained the weight that we asked him to gain. Marcus has done everything that we’ve asked him to do, on and off the field.” Ohio State freshman running back TreVeyon Henderson (32) runs the ball down the field during a drill in spring practice. Credit: Ohio State Dept. of Athletics

Alford emphasized the importance for the freshmen duo to become more complete backs, but added he’s enjoyed what he’s seen from them up to this point.

“They’ve had to enhance the things that they’re really good at and then work on the things that they’re a little bit more deficient at,” Alford said. “They both, in their own right, kind of coming into that space of being that complete player that we’re looking at. It’s obviously a continual process, but very pleased with where they’re at as of today.”

Henderson and Pryor were both unable to compete in their senior seasons of high school due to postponements because of the pandemic. But both were able to leave their marks at their respective high school programs.

The two high school superstars have already formed a bond since arriving in Columbus, living together as roommates.

Alford added that both incoming freshmen have been pushing the veterans in the running backs room.

“They’ve helped elevate the room; some new energy, some new juice, if you will,” Alford said. “They’re young guys, so they’re trying to impress, and so they go extremely, extremely hard when they’re doing things. They’re very intentional. It’s definitely lifted the room up.”

With a room full of talented running backs, Alford said his confidence level in his group is high going into the season.

“Whatever it takes to win games, that’s what we’re going to do,” Alford said. “We’re not into making guys happy. This isn’t a happy camp. We’re going to do whatever we need to do to win football games, whatever that looks like.”