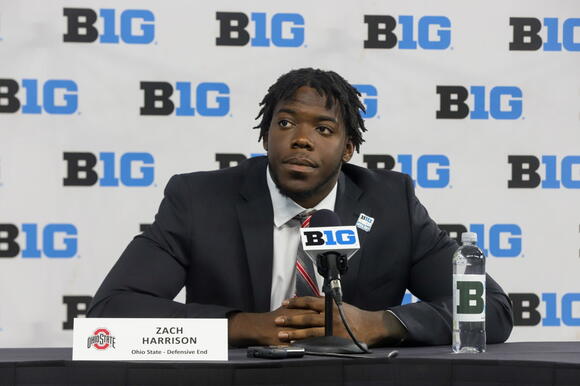 Ohio State junior defensive end Zach Harrison has been named one of the captains of the Buckeyes for the 2021 season. Credit: Mackenzie Shanklin | Photo Editor

Beside him stood one of the six recently-appointed Buckeyes captains : junior defensive end Zach Harrison. The two revealed the news to Harrison’s mother over the phone. After words of congratulations, Tracey Harrison reminded her son of one thing.

“That’s a huge responsibility,” she said.

And it’s a role Harrison is willing to take head-on.

Buckeyes’ head coach Ryan Day said earlier this year that he’s seen a different look in Harrison’s eyes, and his leadership has showcased throughout the spring and summer months as the team worked with strength and conditioning coach Mickey Marotti.

Harrison has also revealed a side of his personality that’s truer to who he is, he said. When he was recruited, the Lewis Center, Ohio, native said he didn’t enjoy the process and considered truly opening up to be “off-putting.”

“If you ask anybody who actually knows me, quiet would be the last word they use to describe me,” Harrison said. “I’m just being myself more, being more comfortable in my skin. The D-line room has definitely seen this side of Zach and I feel like a lot of the team has seen this side of Zach. You’re seeing the real Zach.”

Even still, Harrison said stepping up and leading from the front of the team is something he’s continuing to work on.

“My leadership skills, I always have room to improve,” Harrison said. “There’s things like being more vocal, as opposed to just being a lead-by-example guy, which I’ve always kind of been. That’s something I’m working on every day.”

Johnson said that Harrison has added almost 15 pounds and sees how much bigger and stronger the now-junior is with the 2021 season a week away.

Harrison figures to factor more into the Buckeyes’ defensive line rotation after playing in seven games last season and serving as the team’s leading tackles-for-loss leader with 4.5. A long-term injury to senior Tyler Friday, according to Day, could also allow for Harrison to garner more snaps.

“He’s more confident right now,” Johnson said. “He’s playing at much faster a pace that we like him to play at. We like where he’s at right now.”

Harrison’s demeanor has spread to the rest of his teammates in the D-line room.

Senior defensive end Javontae Jean-Baptiste, who may be prime for a breakout season himself after compiling 20 tackles and 2.5 sacks over the last two seasons, has developed a close relationship with Harrison since the latter’s freshman year. Jean-Baptiste said the two know when to be themselves, but they also know when to push each other.

“He can be serious when he wants to, but at the end, he’s just a fun guy really to be around. I’d say it’s two different people,” Jean-Baptiste said. “It just shows you that he’s gotten comfortable around us and he’s to the point where he feels like he can open up. I feel like Zach hasn’t even touched his ceiling.”

Harrison has high expectations for Ohio State’s rushing defense that featured one of the premier defensive lines among college football; the Buckeyes entered the national championship against No. 1 Alabama, having allowed just 89.1.

Harrison said he takes pride in being an anchor on the defense’s side of the line of scrimmage, and he wants to turn more quarterback pressures into sacks, in addition to stopping the run.

With “captain” now added to his personal resume, Harrison wants to make his mark on the decorated defensive line that’s produced three of the last five Defensive Rookies of the Year in the NFL.

Nonetheless, he’s set high expectations for the defensive line and aims to meet them in 2021.

“I think this could be one of the best defensive lines we’ve seen at Ohio State,” Harrison said. “And that’s saying something.”