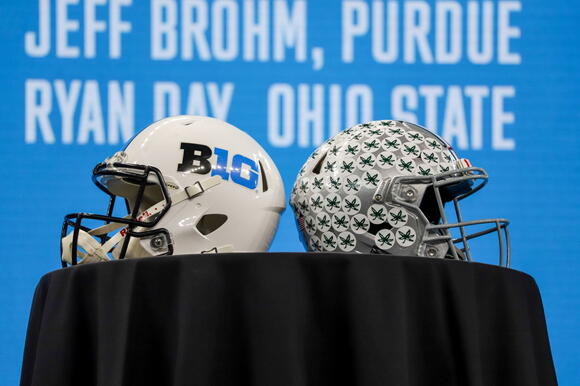 The Big Ten, Pac-12 and ACC announced Tuesday that they will work closely to collaborate on the future of college athletics and will form a scheduling alliance. Credit: Mackenzie Shanklin | Photo Editor

After Texas and Oklahoma announced their intentions to join the Southeastern Conference in late July, the Big Ten, Pac-12 and Atlantic Coastal Conference elected to form a conference alliance to prepare for the shifting landscape of collegiate athletics.

“Student-athletes have been and will remain the focal point of the Big Ten, ACC and Pac-12 Conferences,” Big Ten commissioner Kevin Warren said in a release. “Today, through this alliance, we furthered our commitment to our student-athletes by prioritizing our academics and athletics value systems. We are creating opportunities for student-athletes to have elite competition and are taking the necessary steps to shape and stabilize the future of college athletics.”

The alliance will include scheduling stipulations for football, men’s and women’s basketball and Olympic sports and will create new, interconference matchups. The scheduling aspect will begin as soon as possible, but each conference will still need to honor their current media contract obligations.

In football, the scheduling alliance will seek to create marquee matchups across the three conferences. On the basketball side, the conferences will add early and mid-season games alongside annual events that will include matchups between them. The Big Ten already has an annual event with the ACC, in the form of the Big Ten-ACC challenge in men’s basketball.

The scheduling alliance will extend to Olympic sports as well, as the three conferences will look for opportunities to schedule events among them.

The alliance will also not include any anti-SEC stipulations, and teams will still be freely allowed to schedule games with teams from the SEC.

While the three conferences are aligned in their efforts to better prepare for the future of college sports, Pac-12 commissioner George Kliavkoff confirmed there is no written agreement in place. He said all of these efforts lie on commitments from each commissioner, university president and athletic director in the conferences.

“We’re aligned in how we want to approach this, but there is no contract. There’s no signed document and there doesn’t need to be,” Kliavkoff said.

With Texas and Oklahoma set to fully join the SEC in July 2025, Warren said there is not a timeline in place for the alliance’s implementation.

Warren added that each conference will still follow their current TV and media contracts.

The Big Ten commissioner also said the conference would potentially need to lower the amount of conference games from nine to eight.

As the alliance looks to be prepared for the future of college athletics, Warren said he hopes it will be a stabilizing force in an unfamiliar time in college sports.

“To be able to work with George and [ACC commissioner] Jim (Phillips) in this alliance with our respective conferences is really special,” Warren said in a press conference Tuesday. “What it does is signify that there is still a lot of goodness in college athletics. This is an opportunity for us to come together in a strong alliance to work together.”