Football: C.J. Stroud to start against Minnesota in season-opener 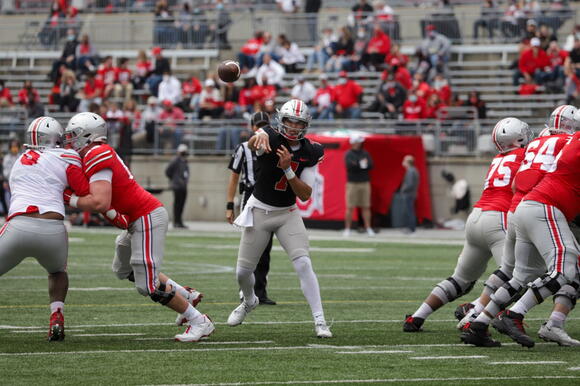 For the first time since 1952, the Buckeyes will enter the college football season with a starting quarterback who has yet to throw a pass in a game.

“ Over the body of work between the spring and then also through preseason, [he] separated himself with his decision-making, his leadership skills, his accuracy,” Day said. “Now we got to go prepare to go play a game. Proud of him, happy for him.”

As Stroud competed through the spring and summer months to earn the starting gig, he said the competition sharpened his abilities and made him a better quarterback.

“It makes you so much better. At the end of the day, if you don’t have anybody pushing you, you’re not going to get better at anything,” Stroud said. “So I definitely think that competition and somebody on your heels is the best way to get better.”

Day pointed to a number of traits that set Stroud apart from the rest, including his touch and athleticism.

With attention to Stroud’s work ethic, Day praised the young quarterback’s will to get better since he arrived in Columbus.

“I think his preparation has been excellent. I think he has a reason for what he does. When the ball goes somewhere and maybe it shouldn’t, he’s got a reason why,” Day said. “I’ve been proud of the way he’s gone to work. Really hasn’t said a whole bunch about this whole competition, just kept his eyes on getting better every day. Because of that, he’s our starter.”

The Rancho Cucamonga, California, native appeared in three games for the Buckeyes in 2020 — scoring a 48-yard touchdown against Michigan State on his only career carry.

Although Stroud is yet to attempt a pass at the collegiate level, Day said his new quarterback doesn’t need to make extraordinary plays but just needs to make the right decisions.

“The good news is we got a really good group of guys around him and we’ll put a good plan together. Going to have a good defense to support him, good special teams. Because of that, he can feel secure knowing that he’s got a good team behind him,” Day said. “He just has to make the routine plays routinely and if he does that then he’s going to be doing his part.”

Although Stroud will start for the Buckeyes to open the season, Day said the entire quarterback corps will need to stay ready to hear their name called.

“ You just never know what’s going to happen, and so those guys have to continue to work on developing and get ready,” Day said. “I’ve been impressed with their approach to it, their response to it and they’re ready to continue to work.”

As Stroud looks ahead to his first starting opportunity, he pointed to a motivating factor that he said is never ending.

“If things go the way I think they will for me this year, I’ll still have that chip on my shoulder because I know where I come from. I know everything I’ve been through. I’ll definitely still keep that mindset and chip on my shoulder,” Stroud said. “But not a negative chip, a chip of ‘I want it more than anybody else.’”