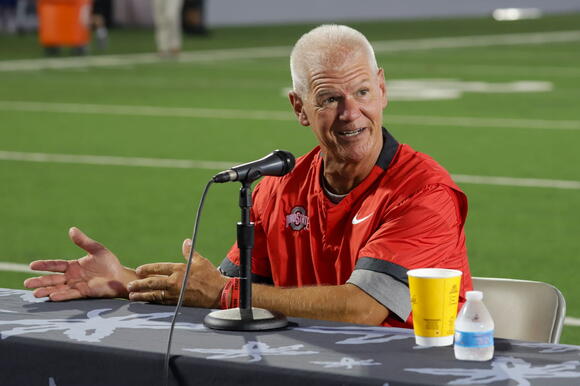 The Ohio State secondary rolled with many punches throughout its 2020 campaign.

Plagued with injuries, the reintroduction of defensive coordinator Kerry Coombs and difficulties surrounding the pandemic, the Buckeyes’ secondary struggled to hit its full potential in the shortened season. But, with key pieces returning from injury and growth from younger players in the unit, the secondary seeks to right the ship in 2021.

With a healthy mix of veterans and young guys populating the secondary unit, Coombs expressed excitement towards the makeup of the position.

“It’s an interesting group,” Coombs said. “We’ve got some veteran guys there but we’ve got some young guys who are not afraid to step up and be counted, too. We’ve got second-year freshmen guys that are gonna go out there and show up.”

The secondary’s struggles culminated in the College Football Playoff National Championship against Alabama, where it allowed Crimson Tide quarterback Mac Jones to toss for 464 yards and five touchdowns.

With a focus on avenging its nightmare performance against Alabama, senior cornerback Sevyn Banks said the unit has put a heightened level of attention to improve from that outing.

“We put as much attention to Bama as we did to Clemson [in 2020],” Banks said. “Everything isn’t always gonna work out sometimes. It’s alright, we’ll be back.”

Although the Buckeyes’ backend had its struggles throughout the 2020 season, there were numerous outlying factors that hampered their ability to succeed.

The injury bug continued into the spring practice session as Banks was forced to sit out most of camp with injuries.

With an attention on health, Coombs said getting through preseason camp unscathed is a priority for the unit.

“We gotta get through camp healthy,” Coombs said. “We got a lot of dings today, a lot of little things. Nothing for publication but little things, nagging things. And we gotta get over that and we will.”

It was also a whirlwind 2020 season for Coombs — who returned to Ohio State after a two-year stint with the Tennessee Titans.

With Coombs now overseeing the entire defense, Ohio State elected to promote special teams coordinator Matt Barnes into the role of safeties coach to alleviate some of the workload off of Coombs.

“He is a diligent, detailed guy. He is my perfect partner in the backend,” Coombs said. “Diligence and details are not always my strong suit and he holds me accountable for that.”

Coombs said Barnes’ elevation allows him to move more freely around the defense and coach all three units easier than in the past.

“I’m getting so much more connected with all of those guys in those other areas,” Coombs said. “It’s a blessing to have Matt because it allows me to do some other things.”

Similarly to the rest of the team, the secondary was also greatly limited in its ability to develop in the offseason leading up to the 2020 season due to issues created by the pandemic.

Now, with a full offseason to work with, Banks emphasized the importance of having more practice time to develop.

“It’s a lot of teaching, a lot more time to grasp a lot of things,” Banks said. “It’s good to be able to put it all at once.”