Ohio Governor Mike DeWine said Ohio’s goal is to bring as many researchers and scientists to the state as possible with the Innovation District. Credit: Mackenzie Shanklin | Photo Editor

Placement of a final structural beam, covered in signatures of those involved, marked the completion of Ohio State’s Interdisciplinary Research Facility at a ceremony Wednesday.

The beam topping ceremony featured Gov. Mike DeWine, Lt. Gov. Jon Husted, University President Kristina M. Johnson, President and CEO of JobsOhio JP Nauseef and Executive Vice President for Research, Innovation and Knowledge at Ohio State Grace Wang, all who  acknowledged the important research that will take place once the building and the rest of the Innovation District is complete. The building is expected to open June 2023.

“It is the cornerstone for the innovation district that is rising all around us,” Johnson said. “Together these facilities will encourage new connections through advanced discovery.” 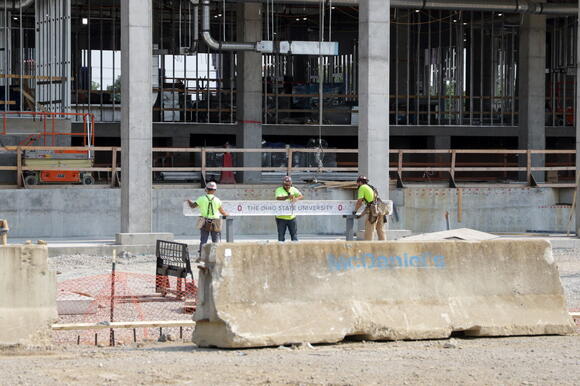 The Interdisciplinary Research Facility is one part of Ohio State’s upcoming Innovation District — which is located on West Campus and will serve as a collaborative space for students, academic researchers, city leaders, Fortune 500 businesses and new start-ups. In November 2017, the Interdisciplinary Research Facility received Board of Trustees approval, according to the website.

The new five-story, 305,000-square-foot research building will serve multiple disciplines, such as biomedical, life sciences, engineering and environmental sciences, with two floors dedicated to The Ohio State University Comprehensive Cancer Center, according to the website.

Gov. DeWine said Ohio’s goal is to bring as many researchers and scientists to the state as possible, which is a draw he hopes the Innovation District will foster.

“When they’re all working together there’s real magic with us,” DeWine said. “That’s really what this Innovation District is about.”

Husted said the research done in the building could lead to powerful discoveries such as cures for diseases. He said his sister unknowingly passed a genetic condition on to her son — his nephew — that will cause blindness in the coming years. While research on the condition will not come in time to help his nephew, he said it will help future generations. DeWine said none of the Innovation District construction would be possible without partnerships with other agencies.

“Think about this: the Ohio State University, Nationwide Children’s Hospital, JobsOhio — you could go on and on,” DeWine said. “This district, which will not only take on very, very important research, but also create a lot of jobs, a lot of in-demand jobs.”

Correction: The headline of this story previously stated that DeWine and Johnson celebrated the opening of the Interdisciplinary Research Facility. The building is not expected to open until 2023, and the headline was updated to reflect that.