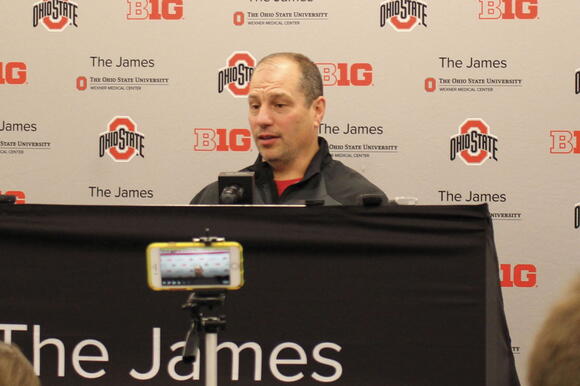 The Buckeyes will begin preseason camp Aug. 3, but important preparation for the 2021 season comes well before then.

Ohio State returned to typical summer workout sessions after the pandemic tossed familiar routines to the wayside in 2020. Putting on weight and getting faster and stronger are prioritized in summer sessions, in addition to building chemistry and team leadership.

When head coach Ryan Day asked the team if anyone had gone through summer workouts with strength and conditioning coach Mickey Marotti before, he said not many hands raised.

Many of the second-year Buckeyes are in a similar boat as first-years — they’re experiencing the rigors of summer workout sessions at Ohio State for the first time.

While physical development is a focus, Day said summer sessions lay the groundwork that can ultimately lead to championship glory.

“Physically, that’s been big, but more importantly it’s the leadership and accountability and finding ways to create conflict and show leadership because the first time that that happens in a game, where we go down a score or something adverse happens, we need guys to step up in a leadership role,” Day said. “Mick does a great job of creating those type of situations. We’ll do that in preseason because, in the end, that’s what wins championships, is that leadership.”

Marotti is the assistant athletic director for football sports performance at Ohio State, and will enter his 10th season with Ohio State since following Urban Meyer from Florida in 2012.

The 35th-year coaching veteran uses his sport science knowledge to analyze player performance and track data with metrics such as hydration and additional statistics kept by Ohio State to maximize development. Day said Marotti combines those tactics with an old-school work ethic.

Senior offensive lineman Thayer Munford will enter his fifth year of working out under Marotti’s guidance. Munford said Marotti has helped make him and his teammates stronger, better conditioned and mentally tough.

The Cincinnati native also said summer workouts develop player leadership, and it can mean a lot more to players when their teammates step forward and encourage those around them to complete a challenging workout.

Junior defensive end Zach Harrison said it’s especially important to uplift underclassmen — and freshmen particularly — when the going gets tough. With the added wisdom of having been through the challenge of summer workouts and acclimating to a new team, new school and new home, Harrison said he tries to help younger Buckeyes through their growing pains.

“Freshmen have it the hardest at Ohio State because they don’t know. They come in the best player, and then for the first time ever in their lives, they’re one of the worst people on the team,” Harrison said. “We’ve helped them out more than anything, tried to show them the way and been there when they feel like, ‘Dang, nothing’s going right.’”

Senior tight end Jeremy Ruckert said he’s tried to make it evident he’s willing to do anything to be there for his teammates so that their trust is there when it really counts down the line.

“Especially during this dead period with the coaches gone, it’s kind of been more of player-driven workouts. I’ve really tried to just be there for those guys, anything they need,” Ruckert said. “Whether it’s motivational, or just football-wise or even off the field, they have something going on with class or need a ride somewhere. That’s the biggest thing that I needed when I was younger. Football is one thing, but coming to a new school with expectations like this, you’re not used to the big fan base and everything like that.”

Once the Buckeyes begin preseason practice, Day said each week will consist of two days in helmets, a couple more with shells, off days on Sunday and then a return to shells. Rules this year allow for teams to have nine practices in pads, nine in shells and seven in helmets, according to the head coach.

It can be easy to keep an eye on the future, but Day said before the Buckeyes put their eye on game No. 1 at Minnesota in September, he wants them to remember Ohio State’s mantra of staying in the moment and focusing on the task at hand.

“You got to do a great job of maximizing the day,” Day said. “If we can just stay on that focus, we’re gonna have a chance to play in some championship games.”