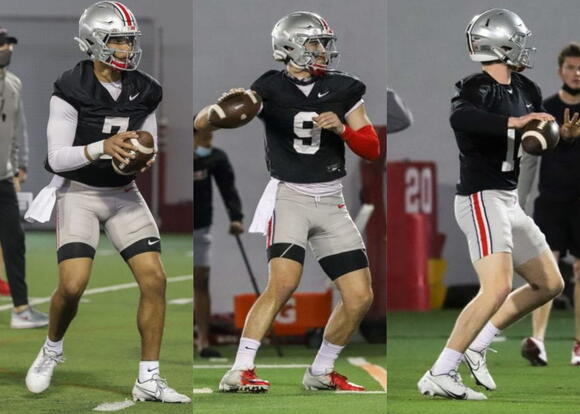 It’s been two years since the Buckeyes last entered fall camp with a new starting quarterback at the helm, and head coach Ryan Day has yet to make a decision on who that quarterback will be in 2021.

With fall camp opening Aug. 3, redshirt freshmen C.J. Stroud and Jack Miller and true freshman Kyle McCord are locked in a quarterback battle that kicked off in the spring. As Ohio State’s season opener against Minnesota is just 38 days away, Day said the quarterback battle will rage on throughout the season with a focus on development.

“It isn’t just about winning the job and playing the first game; it’s a long way to December and January and everything else,” Day said. “So if they focus on development and getting better, when they have their opportunity to play, then they’ll let the rest of the chips fall where they may.”

But with a focus on the season opener, Day said he would like to have his signal-caller decided two weeks prior to their meeting with the Golden Gophers Sept. 2.

“I’m not going to put a date on it but you’d like to have it by the first two weeks of the preseason,” Day said. “So you can start to get them the reps for them to be ready to play in that first game.”

All three quarterbacks vying for the void left by Justin Fields are yet to attempt a pass at the collegiate level — marking the first time since 1952 that the Buckeyes have entered a season with a starting quarterback who has not thrown a college pass.

Due to the inexperience amongst the three quarterbacks, Day said he’s going into the season with some nerves surrounding the position.

“I’m nervous about playing in any game with a young quarterback, especially one that hasn’t thrown a college pass,” Day said. “There will be a lot of sleepless nights as we head into that first game.”

Although the quarterbacks are entering the season with little experience, they have a talented and veteran offense around them.

Up front, the quarterbacks will also have both tackles that kept the pocket clean for Fields — junior Nicholas Petit-Frere and senior Thayer Munford.

With a stellar supporting cast around the young quarterbacks, Day said they’re in a position to succeed right off the bat.

Ruckert shared Day’s sentiment and emphasized the need for the offensive veterans to help the young quarterbacks out whenever needed.

“They’re all new. They’re all learning. They’re young,” Ruckert said. ”But at the same time they’re super, super talented and they’re coming along so well, so it’s important for us to be there as older guys and as seniors to be there for them to lean on.”

Although Ruckert said it was hard to tell how far along the quarterbacks are at this point, he added that all three have the drive and professionalism to succeed at this level.

“We get texts from all the guys, ‘Hey we’re working out today if you wanna come by, let’s get some extra work in,’” Ruckert said. “So they all really care. They’re making an effort to really show that they want to be the starting quarterback and whoever it is, I got their back.”