Second half surge propels No. 1 Carmen’s Crew to 77-65 win over No. 16 Mid American Unity in First Round of TBT 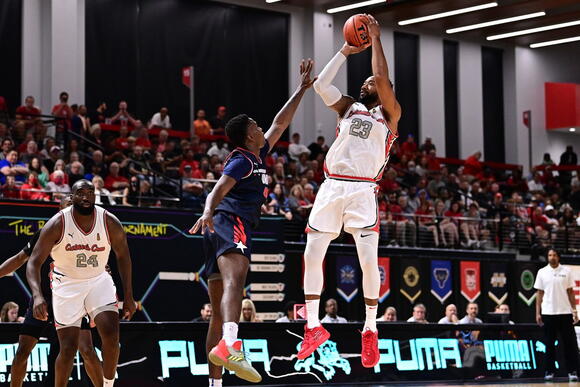 Carmen’s Crew guard David Lighty shoots the ball during the game against Mid American Unity in the First Round of The Basketball Tournament at the Covelli Center July 23. Carmen’s Crew won 77-65. | Credit: Ben Solomon for TBT

Come the final buzzer of the second quarter Friday, it appeared as if No. 1 Carmen’s Crew stumbled into halftime still on its 2019 The Basketball Tournament championship hangover that caused them to fall in the first round one year ago.

Tied at 37 with No. 16 Mid American Unity and having committed 10 first-half turnovers, Carmen’s Crew head coach and former Ohio State forward Jared Sullinger gave his team a simple message that translated quickly into the second half: Stop turning the ball over.

“That was it. That was my main thing,” Sullinger said. “These guys, once we started taking care of the ball, you saw the lead starting to spread a little bit. Then on top of that, we started playing a little bully ball with [power forward Jeff] Gibbs and Julian Mavunga, Kosta [Koufos], even [guard David] Lighty. We started getting to that paint and we just showed our will.”

A 14-3 run over the first 3:31 of the third quarter powered Carmen’s Crew to a lead from which it never looked back, defeating Mid American Unity 77-65, avenging its early exit in the $1 million tournament in 2020.

“That first half, we seemed a little tipsy still. I hope it’s all out of our system now,” Lighty said. “Got our feet wet and we can hopefully get it rolling now.”

Carmen’s Crew allowed just eight field goals in the second half and shot over 53 percent in both halves, keeping the pressure on a Mid American Unity team loaded with former players from the Mid-American Conference.

Koufos and shooting guard William Buford both posted double-doubles, with the former scoring 16 points and the latter 14. Lighty led all scorers with 19 points and 8-of-12 shooting, including a trio of 3-pointers.

Koufos joined Carmen’s Crew for the first time this summer, and said he jumped at the opportunity to play when Sullinger inquired via text.

“It’s pretty cool to have TBT and be on ESPN, it allows the other guys more exposure as well, too,” Koufos said. “There’s a lot of talent here. Just to be able to play the game and be healthy, especially with guys like David and Jon [Diebler] and so forth, just to rehash good, old memories back in the day.”

Friday also marked the first time TBT played in front of a live audience since 2019, and Koufos said the roars in the Covelli Center definitely helped Carmen’s Crew feel the momentum, especially during the third quarter.

“Shoutout to Ohio State fans, that just shows how big time Ohio State is,” Koufos said. “We got a great alumni base and great fans. We’re truly honored, truly blessed to be here and have that support, too. It only helps us win these games, so shout out to the Ohio State fans for being there to support us.”

The momentum continued to trade between the teams. The 7-foot Koufos keyed the way to a 10-3 Carmen’s Crew run in the mid-first quarter with a pair of jumpers, and Lighty followed with one of his own to give his team a 15-12 lead with 3:41 left.

Mid American Unity, though, turned the tables and raced ahead 21-15 on a 9-0 run behind three Carmen’s Crew turnovers. The first 3-pointer of the game for Diebler helped Carmen’s Crew on its way to ending the first quarter down 23-21.

Lighty received medical attention for an apparent eye injury early in the second quarter, and said guard Aaron Craft slapped him when he made a steal attempt. Meanwhile, newcomer and power forward Julian Mavunga held down the offense in his place.

The 6-foot-8 forward scored six points in just over a minute and five-straight over a 40-second stretch, helping Carmen’s Crew tie the game at 27 with 6:17 to go in the first half.

Mid American Unity fell cold, shooting 3-of-11 the rest of the quarter but saw a near last-second layup by power forward Jimmy Hall Jr. that sent the game to halftime tied.

Lighty led Carmen’s Crew with eight points in the third quarter as his team began to pull away, outscoring their opponents 27-18. He reflected on returning to the campus on which he first arrived back in 2006.

“Exciting, electrifying. A little bit of jitters,” Lighty said. “Takes me back almost 15 years in my first game at Ohio State. 2006, long ways away. Just to be back here on campus, have the fans, the atmosphere, the energy. It felt great.”

Mavunga finished with 10 points, Gibbs totaled eight and guard Shannon Scott scored six. Diebler made a 3-pointer and Craft scored his lone point on a free throw, both coming in the first quarter.

“They’re a solid team. You could see they play together, they play well executing and use all of their guys,” Lighty said. “For us, we got to come in [Saturday], see what we’re gonna game plan with and just go out with high energy and bring that Buckeye crowd to help us out and just come out and try to get the win by any means.”

Carmen’s Crew will tip off against Men of Mackey Sunday at 4 p.m on ESPN.