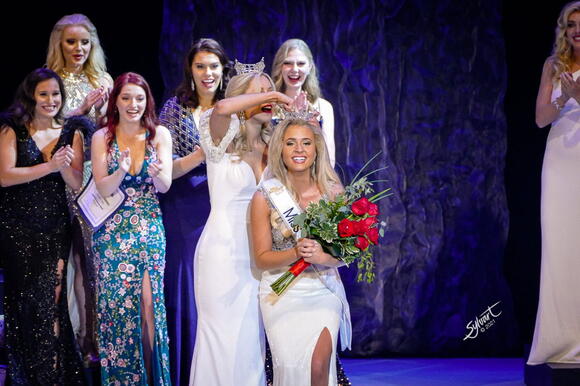 Lora Current, a fourth-year at Ohio State, was crowned Miss Ohio June 19 in Mansfield, OH, and will advance to the Miss America competition in December. Courtesy of Lora Current and Sylvart Photography.

Lora Current is no stranger to traveling across Ohio, introducing herself to new people with enthusiasm and advocating for literacy in her state.

Up until a year ago, however, Current was a stranger to the Miss Ohio Scholarship Program, which she went on to win June 19 in Mansfield, Ohio, as a self-proclaimed underdog. A fourth-year in social work, Current said she first heard about Miss Ohio while working for the Ohio Fair Managers Association. Although her interest was initially piqued by scholarships offered by the program, she said she was ultimately drawn in by characteristics shared by past participants.

“Just looking at some of the girls that have gone through this — I really did the research before I entered — it’s just incredibly smart girls,” Current said. “It’s not girls playing dress-up.”

After entering Miss Oxford in the beginning stages of her bid for Miss Ohio, Current was crowned runner-up. Because participants in the statewide competition are required to first win at a local level, she tried for Miss South Central Ohio and won.

From there, Current said she used the extra year allotted to her due to the pandemic to fine-tune her talent — tap dance — and work with Kasey Wilson Johansen, the mentor and director designated to her through the Miss Ohio program. Current said the biggest thing was making sure she kept her answers to the point.

“I can get these long answers, so that’s really what we worked on with her is, ‘OK, how do I say everything I want to say, be true to myself, but in 30 seconds or less?’” Current said.

Johansen, who competed in Miss Ohio from 2004-2008 and was a finalist all four years, said she worked with Current on walking, styling and speaking, but what she ultimately wanted to impart upon her mentee was confidence in every facet of the competition.

“Obviously she has some sort of confidence because she went out for this pageant,” Johansen said. “But really, throughout it all, it’s building her confidence, because she’s the one that has to stand on that stage at the end.”

Despite the weight the duo placed on preparing for interview questions and the time Current spent practicing tap dance, the 20-year-old Rosewood, Ohio, native said she poured the most effort into her service platform because it pertained to an issue close to her heart.

When she was in seventh grade, Current was diagnosed with a learning disability. Although she said it was late in life to find out about it, she was able to connect with a tutor, and not only did she come to love and succeed in school, but she graduated high school early.

“I think it’s a really neat story, but because I went through that — I went through the tutoring, and I’m still a student now — I found that I’m able to relate to students in a way that a lot of school teachers or parents can’t,” Current said. “And by telling my story, by sharing my real-life experiences, I think it’s, in a way, empowering.”

Current founded her nonprofit #ReadOnUSA in 2019. She said the goal of the organization is to provide resources and support to students and their families, whether or not the student has a learning disability, with the goal of ultimately increasing the literacy rate in Ohio.

In addition to raising money through her nonprofit and pointing participants to other resources offered by organizations such as the Ohio Department of Education, Ohio Ready to Read and the Dolly Parton Imagination Library, Current began a school tour in March to visit students and emphasize the importance of education.

“You’re qualified to do whatever you want,” Current said. “You’re not regulated by your economic status. You’re not regulated by a grade you just got. Just because your parents didn’t finish high school doesn’t mean you can’t. So I think that’s the underlying message of just, you’re valuable, you’re worth it.”

Current will compete in the Miss America competition in December at the Mohegan Sun Arena in Uncasville, Connecticut. In the meantime, she said she will continue to find ways to fill her schedule and serve people, both as Miss Ohio and as Lora Current.

“I run a nonprofit, I work, I go to school, I volunteer, and now I’m Miss Ohio, and it all works,” Current said. “Honestly, it’s because my heart is in everything I do. I don’t do things for filler. Everything I do has a purpose.”