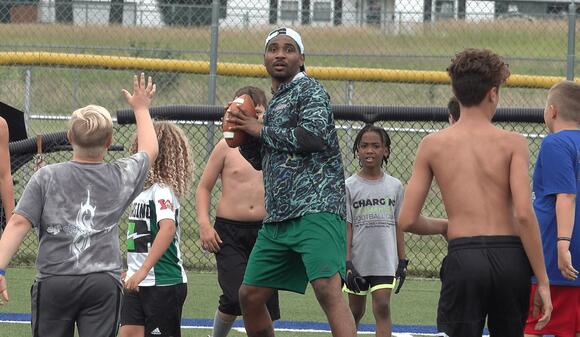 After years of support from the Ohio State fan base and community, former Buckeye quarterbacks Braxton Miller and Troy Smith are looking to give back with the Urbana Prep and Sports Institute.

The vision for the UPSI is an athletics-focused academy, similar to IMG Academy in Bradenton, Florida, but Smith emphasized that athletics will take a back seat to the educational and vocational opportunities that the school will provide.

“We want to embed and imprint our athletes and students with the understanding that education is the key,” Smith said. “We believe that your brain is a much sharper tool than any athletic trait that you can ever have so we want to push education to the brink.”

The former Ohio State football stars developed the idea for the UPSI from the ground up over the course of a year and a half.

“It’s a dream of Braxton’s, it’s a dream of mine,” Smith said in an appearance on the “Hang on Supi” podcast. “Hopefully we can make it come to fruition.”

As a trial run of the dorms and facilities, Miller’s company, “Charg1ng,” and Smith held the 2021 Charg1ng Heisman Elite Football Camp July 9-11. About 250 campers attended and over 40 former Ohio State and NFL football players helped run it.

Over the three-day camp, athletes participated in both general and position-specific drills, listened to words of advice from some of Ohio State football’s greatest alumni and got signatures from Miller and Smith on every article of clothing they could find.

Urbana, Ohio, natives also got in on the excitement with an adjoined community event held Saturday featuring a fleet of local food trucks, live music and a job fair.

Smith called Urbana the “perfect fit” for the academy, pointing to the nature of the population as a reason for their decision to set up shop there.

“I’m a Springfield guy, I spent a lot of time in Springfield as a youth so all the people around here are me. I think we’re the same type of people,” Smith said.

Among those in attendance at the camp were former Ohio State head coach Jim Tressel and former Buckeyes Ryan Shazier and Parris Campbell.

“The actual support we’ve received from our Buckeye family, it can’t be matched,” Smith said. “My Buckeye brothers have stepped up and made this camp incredibly authentic and then that adds to the authenticity to why the kids would want to be here [at the UPSI].”

Although the Charg1ng Heisman Elite Football Camp focused on football, Smith said it will be one of the academy’s four sports when it opens.

Dubbed the “Core Four”, the UPSI will offer football, basketball, baseball and soccer on its opening day — a date still to be determined.

Tressel voiced his support for what Miller and Smith are aiming to build with the UPSI and said that frequent trips to the school are in his future, should the UPSI become official.

“This is a large endeavor, but [Miller and Smith] dream big,” Tressel said. “That’s what’s fun about watching what they’re doing.”

Shazier credited the Ohio State football program for motivating current and former Buckeyes to give back to their communities and pay their success forward.

“[Buckeyes] see how blessed [they] are to be able to go to Ohio State, and how many people are supporting [them],” Shazier said. “So [they] want to be able to give back and to keep that tradition moving forward.”