Football: Members of 2010 football team call for reinstatement of wins 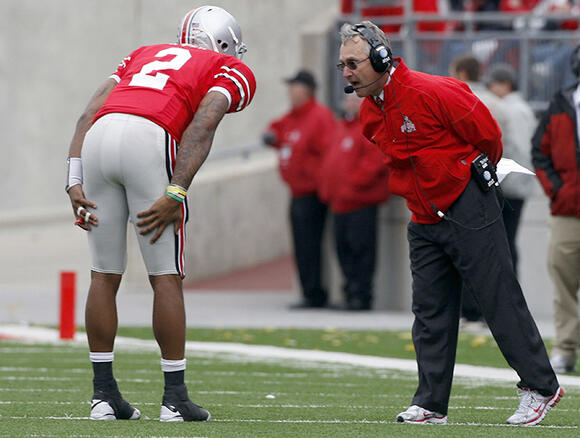 Members of the 2010 Ohio State football team are calling on the NCAA to reinstate their wins from that season following the introduction of name, image and likeness rules in early July.

Former Ohio State quarterback Terrelle Pryor — along with the other four members of the “Tattoo-Five” — released a statement Tuesday seeking a reinstatement of their records, wins and titles.

“Although this could never undo what we and our families endured for breaking rules that should have never existed in the first place,” Pryor said. “We believe reinstating and acknowledging the accomplishments of ourselves and our teammates would be a huge step in the right direction.”

The 2010 Ohio State football team earned a 12-1 record, a Big Ten title and a Sugar Bowl win over the Arkansas Razorbacks behind legendary coach Jim Tressel.

However, following the “Tattoo-Gate” scandal — in which Pryor and former Buckeyes wide receiver DeVier Posey, running back Dan Herron, offensive lineman Mike Adams and defensive lineman Solomon Thomas sold their memorabilia in exchange for free tattoos — the NCAA moved to vacate the season from record books.

The scandal also left a stain on Tressel’s legacy and led to his resignation from the head coaching position in 2011.

“We are calling for our school records and legacy to be restored so that Buckeye Nation can look at us with the same love and fondness that we’ve always had for them,” Pryor said. “We look forward to one day telling our story and the Tattoo 5 forever being a legitimate part of Ohio State’s glorious history.”

Pryor cited the NCAA’s new rules allowing student athletes to profit off of their name, image and likeness as the primary reason for the governing body to reinstate their wins. This comes on the heels of former USC running back Reggie Bush calling for the NCAA to reinstate his 2005 Heisman Trophy July 1 — which was vacated after it was discovered he accepted money to play for the Trojans.