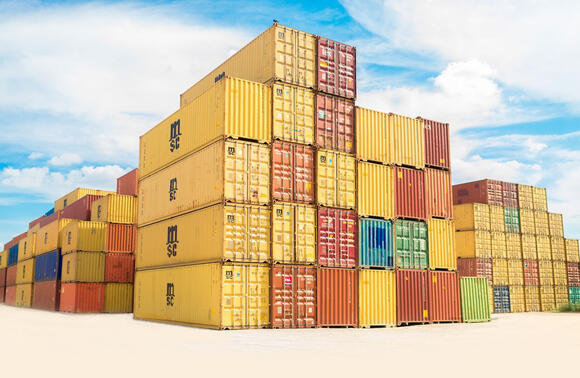 So many of us, so many Americans, were sitting at home doing nothing more than pointing and clicking on Amazon. We went on a shopping spree in preparation for the epidemic. We ordered a lot of material, and it's been arriving in record numbers for a year, so it's building up at the ports of Long Beach and Los Angeles because the system couldn't handle what we called a "tsunami" of items.

If you order something from home that is created in Asia, it is almost certain that it will be imported through the ports of Los Angeles and Long Beach. Those are America's busiest ports. 40 percent of all imports into the United States pass through these ports.

Ordinarily, cargo is loaded into containers, which are then transported across the ocean. We were on one of these massive ships that was the length of three football fields, and the containers were stacked up to nine stories high. Normally, it takes roughly two weeks for a container to traverse the ocean. They frequently dock in the Los Angeles and Long Beach ports. Getting them out of the harbour used to take a day or two.

Truckers are usually the ones who pick them up. There have been numerous concerns about a shortage of trucks. The people who work with trucks at the port claim that there are enough of them. The number of truckers was the same as it was a year earlier. It's just that the volume of merchandise being released is simply overwhelming.

The whole system is broken down. Rail businesses are moving as much as they have in the past. But there's so much more that needs to be moved now that the old ways, old habits, and old pace are simply not up to the task. Before the crisis, you'd point and click, place an order, and wait for it to arrive in days, if not weeks. People have been waiting for months. Everyone is attempting to contribute a piece of the solution. But so far, It hasn't all come together into a complete puzzle, and it doesn't look like it's all going to come together before Christmas.