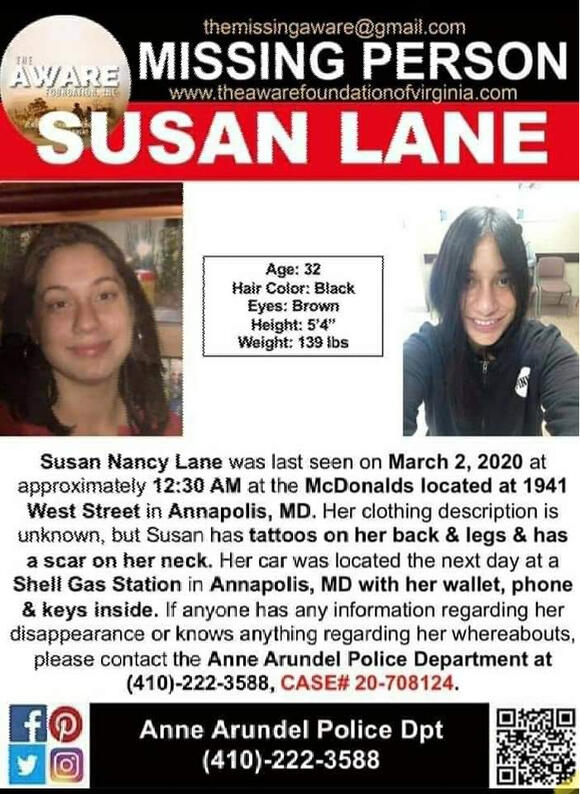 ANNAPOLIS, Md. – A Maryland mother’s anguish has intensified every day since she last spoke with her daughter just after midnight Monday, Mar. 2, 2020, six days before she would turn 32-years-old. The missing woman’s last known call was to her mom from a McDonald’s parking lot, telling her she felt harassed by an acquaintance.

“I’ve been so depressed since Sue,” Susan’s mom Nancy Lane trails off. “Since Sue is not here. I just wish she’d – come home.”

Susan Nancy Lane was 31 years old with straight shoulder-length black hair and weighed 139 pounds when she went missing nearly two years ago. Her eyes are brown and she is 5 feet, 4 inches tall. Nancy said her daughter was wearing a gray turtleneck shirt. Her last known address was 2022 Chesapeake Road.

The night her daughter disappeared, Susan called 911 three times, Nancy said. In the days leading up to the McDonald’s incident, she mentioned to her mom that she was scared; concerned she was being followed.

According to Nancy, Susan called 911 from the McDonald’s at 1941 West Street to report the harassment; a woman, Susan told the officer, who had bothered her previously.

“She was at a McDonald’s that night getting something to eat, and she called me up and said she’s being harassed and she said she called 911 like three times; she was calling me up at 12 o’clock at night,“ Nancy recalled.

Annapolis City Police officers arrived at the McDonald’s around 12:30 a.m. They interviewed both Susan and the unidentified woman, Nancy explained. She went on to say the officers determined they would not pursue the matter further, stating that the woman told them she did not harass Susan and the officers did not witness any offense.

The AAPD denied requests for records citing an ongoing investigation. And so far, Detective Schline has been unavailable for an interview to obtain details or an update on Susan’s case for this article. However, Kimberly Whitaker, an advocate for The AWARE Foundation, a non-profit missing persons organization, provided the following information. As details emerge in Virginia’s Shopping Cart Killer arrest, a detective at the Fairfax County Police Department is investigating the possible connection with Susan’s unsolved missing persons’ case.

A few hours later, around 9:30 a.m., Nancy said she received a call from Susan’s number, but the caller’s voice was not her daughter’s. It was a contact of Susan’s, Chad Allen.

He told Nancy that Susan’s unusual black BMW had been parked at one of the pumps for hours at the Shell Gas Station at 2056 West Street, but Susan could not be found.

“You can’t miss the car. It had a spare tire on the front of it,” Allen said.

When Nancy pulled into the Shell Station around 2:00 p.m. to retrieve her daughter’s car, she noticed Susan’s sedan still positioned at the gas pump with the door ajar. Confused about why her daughter’s car was there, she questioned the female attendant on duty (Allen’s girlfriend at the time), who then called Allen to come in and explain what he knew to Nancy, who was beside herself at this point.

At 5 feet, 4 inches, Nancy said her daughter was known to pull the car seat full forward. When Allen, who stands 6 feet, 2 inches, sat behind the steering wheel, Nancy said he did not need to adjust the seat to drive it. This detail may have led to the theory by the police that Susan may not have driven her car to the Shell Station.

“Detective Schline demonstrated how police retraced Lane’s last known steps, starting at the Annapolis McDonald’s on West Street. However, investigators don’t know if Lane drove her own car to the Shell gas station or if someone else did,” Roper reported.

When Nancy and Allen first searched the vehicle while still parked at the pump, Nancy said Susan’s keys were in the ignition, and her purse and cell phone were lying on the passenger’s seat. The only missing piece to this troubling puzzle is Susan.

“I just want her to come back home,” Nancy sobbed.

The possible new development for Susan and her family came with the arrest of alleged serial killer Anthony Eugene Robinson aka the Shopping Cart Killer, which Chief Kevin Davis of the Fairfax County Police Department (FCPD) in Virginia officially announced Friday, Dec. 17.

Following this revelation, the chief requested assistance from other law enforcement agencies and missing persons organizations as they began to scour the area with the anticipation of additional victims.

“We are in the process of conducting, along with many other partners, a retrospective investigation … we’re going to figure out exactly where he’s been and we’re going to work with our law enforcement partners, homicide detectives, missing person detectives to see if we can identify any other victims and families and communities that he has brought harm to,” Davis said.

Whitaker and The AWARE Foundation, based in Virginia, leaped into action. Moved by the chief’s invitation, Whitaker quickly disseminated Susan’s information to the FCPD. She received word the next day that Susan’s case had an assigned detective investigating whether a connection existed between Susan Nancy Lane and the Shopping Cart Killer.

Will your share be the one to bring Susan home? Would you please help bring Susan home to her family? If you have any information related to Susan’s disappearance, please get in touch with the Anne Arundel County Police Department at 410-222-3588 and reference Susan’s case number 2020-708124.

ANNAPOLIS, Md. – Maryland’s governor contradicted the world’s leading health organizations at a recent news conference when he narrowly defined a fully vaccinated person as one who has received their booster shot.