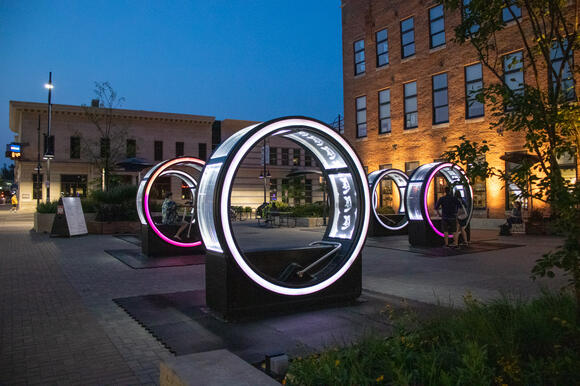 The zoetropes of the exhibit bring light and color to Iowa City's Pedestrian Mall.(NewsBreak/Taylor Coester)

(IOWA CITY, Iowa) Wandering the Pedestrian Mall has become a lively experience since the traveling Loop art installation set up camp for the summer as the circular rings illuminate downtown shops and music beats in rhythm with the lights.

“Loop turns Downtown Iowa City into a retro-futuristic playground,” according to Think Iowa City, one of the commissioners of the exhibit.

The outdoor exhibit consists of 12 large zoetropes fashioned from the 19th century optical toys, which provide an appearance of continuous motion. The illusion of the toys comes to life when the images lining the inner rim of the rotating cylinder were viewed through its slits.

At first glance, these larger, interactive models seem like glowing ships sent by aliens from the future. However, the combination of the zoetrope’s flipbook-style animation with a music box and railway handcar send visitors back in time for a moment.

Sitting inside the cylinders and pumping the bar brings the fairytale-inspired illustrations to life. Melodies play and lights flicker to the tempo at which people pump the bar.

Recently, the images and music of the installments were updated to include different hand-drawn artwork and tunes to match. Some cylinders now feature colored drawings as opposed to the once all black and white images.

Iowa City has been hosting the American debut of the exhibit's revised format on its “loop” around the world since July 9, 2021.

Previously, the Loop installation visited 18 different cities across the United States and Canada. It also made a trip to Lugano, Switzerland, according to a map made by Quartier des Spectacles Montréal.

The exhibit first premiered as part of the festival Luminothérapie in 2016-2017 at the Place des Festivals in the Quartier des Spectacles in Montréal.

Quartier des Spectacles handled production for Loop, as well as 11 other installations that travel the world.

“The goal of the company that produces them is really to provide public art that isn’t just something to look at or view, but that you can engage with,” Executive Director of Iowa City Downtown District Nancy Bird said in an interview with Iowa City Update.

The creator of Loop was the company Ekumen in collaboration with the following:

Transcending time, people of all ages have come to the Ped Mall to enjoy the aesthetic and interactive work of the creators.

“It’s delightful. We’re seeing a lot of people laughing and having some fun with it,” Bird told Iowa City Update.