How DACA being ruled illegal impacts the Boulder community 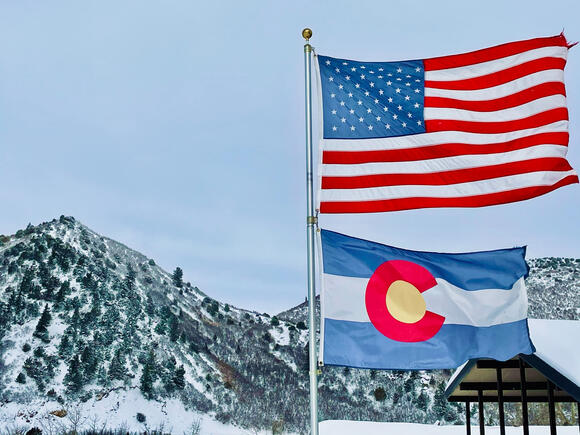 Image of the U.S. and Colorado state flags.Courtesy of Fr. Daniel Ciucci / Unsplash

Maria Gordillo, the director of community engagement at the non-profit Immigrant Legal Center of Boulder County, was on a camping trip with her family when the news broke: U.S. District Judge Andrew Hanen ruled on July 16 the Deferred Action for Childhood Arrivals (DACA) program was unlawful and new applications must stop being processed.

“I was devastated,” Gordillo said. She thought of those who had applied for DACA through the center who now faced an uncertain future.

“It was hard for me, ‘cause I had to let them know on Monday of what was happening—and that, that was very heartbreaking for me to do to them,” Gordillo recalled.

The reactions from impacted clients were mostly fearful and angry, shared Gordillo.

As of March 2020, there were over 14,000 active DACA recipients in Colorado and, as of 2019, 64% of those in Colorado who were DACA-eligible had applied for DACA, according to The American Immigration Council.

The United States Citizenship and Immigration Services (USCIS) states on their website that pending applications are on hold while Hanen’s court order is in effect.

Violeta Chapin, the clinical professor of law at the University of Colorado Boulder (CU Boulder) Law School who oversees the Immigration Defense Clinic, said she doesn’t think these pending applications will be processed, since the biometrics appointments for first-time DACA applicants were cancelled. She also said it’s likely that the $495 application fee will be kept, even if the government never finishes processing them.

Over the spring academic semester, Chapin and students in the Immigration Defense Clinic at Colorado Law helped compile and submit between 20 and 25 new DACA applications, said Chapin—which now, she believes, won’t be processed at all. The Immigrant Legal Center of Boulder County had submitted about 35 to 40 new applications, said Gordillo. She, too, doesn’t think they will be processed.

There’s an estimated 50,000 applications nationwide, Chapin explained, that have abruptly stopped being processed.

Part of the frustration is that since DACA was closed under the Trump administration from 2017 through much of 2020, there was only a short window of time for first-time applicants—many of whom had aged into the 15-years-old age requirement over the years—to apply for the program, Chapin said.

“It’s absurd, and we should be embarrassed,” Chapin said about the back-and-forth decisions on DACA.

Connecting with the immigrant community

As the daughter of a mother who immigrated from El Salvador, Chapin often visited her family in El Salvador and wished that they could come visit her in the U.S. As she’d later learn, immigration and visa restrictions made that dream nearly impossible.

“That stuck with me as I grew up. And I became a lawyer and, all of the sudden, with that law degree, you have a little bit of power,” Chapin said, adding that with power comes responsibility. “And I wanted to keep working with—with that immigrant community. It was also important to me that I was bilingual, which has always been really helpful in my life.”

Speaking the native language of clients is also important to Gordillo, who helps create a Spanish-first speaking environment at her work.

“Most of our clients...they’re all native Spanish speakers, and we want them to feel comfortable,” Gordillo said. “Being a Latina and speaking to someone in Spanish, there’s a different trust and communication with them.”

Growing up in the Boulder area with family friends who were immigrants, Gordillo witnessed the struggles and hardship immigrants faced throughout their lives. It inspired her to become an immigrant rights activist in high school and, following the election of former President Trump, to get involved with the Immigrant Legal Center of Boulder County.

“I was terrified for my community,” Gordillo said about President Trump winning the 2016 election. “I was seeing a lot of discrimination within this community, especially, and I wanted to be a part of something and make a change.”

Through working at the center over the years, she’s seen progress that’s created hope for the community.

How the ruling impacts the Boulder community

The feeling of progress Gordillo felt in regards to immigration was stunted following the July 16 ruling, which Gordillo said has a big impact on the Boulder community.

One of the effects Gordillo expects to see if DACA is not restored is a decline in student enrollment.

“For people who are undocumented, going to college is really expensive,” Gordillo said, adding that without DACA, many of these teenagers and young adults cannot apply for work permits or receive scholarships. “A lot of the students will be dropping out of college.”

For Chapin, helping students at CU Boulder is one of the top priorities.

“There are certainly DACA recipients in Boulder. We have clients who grew up almost their whole life in Boulder, they went to Boulder public schools and now they’re involved at CU Boulder as college students,” said Chapin.

There are a variety of immigration-related issues that CU Boulder students and staff members can face, Chapin added, and in her role, she aims to provide a sense of support and clarity when navigating these complicated matters.

“I think one of the best things that we as lawyers can do is be responsive to our clients and try to comfort them through things like this,” said Chapin. “And it’s amazing how many of them still continue to remain hopeful.”

One woman Chapin recently spoke with is just starting her DACA journey. Despite the ruling, she’s still collecting her evidence needed to apply in hopes that things will change in the future.

“I think people need to have hope. They need to believe that something could change,” Chapin said.

When clients Gordillo speaks to feel discouraged, she said she tells them the Spanish phrase, “Sí, se puede.”

“I always tell them, ‘Don’t give up,’” Gordillo said, sharing that she believes it’s important for those impacted by DACA to know they have a community that will advocate for them.

For those who want to see the ruling change and for DACA to be opened to first-time applicants again, a point of hope is the American Dream and Promise Act, which would provide a path to receive permanent resident status for DACA recipients. Chapin said she’s hopeful that the act will come through the budget reconciliation process.

In the meantime, many DACA-eligible people are left in limbo.

“DACA has always been impermanent,” said Chapin, explaining that it can be stopped and started on a dime with frequent lawsuits. “This decision is yet another one in a long line of court decisions that have affected DACA recipients.

“And it's unfortunate, really, that these young people’s lives are being whipsawed back and forth by judges and congressional representatives who continue to fail to find a permanent solution for DACA recipients.”

Redistricting in Colorado: State House, Senate representatives and a political consultant share what to look out for

The Colorado population is rising, and as a result, it’s gaining an 8th Congressional District, signifying greater representation for Colorado in the U.S. Congress. The next step is deciding where this new congressional district will fall in relation to Colorado’s other districts.

Underneath the summer sun, Justin Matott smiles at those passing by his booth at the farmers market in the SouthWest Plaza parking lot on the morning of July 10—only, it’s not fruits or vegetables that he’s selling: it’s his children’s books.

The fund used to upkeep the roads, repair buildings and fulfill capital projects is at-risk of being fully depleted by 2025 if drastic changes are not made in the City of Littleton. City leaders are now asking residents for input, before anyone feels its impact on their day-to-day lives.

Five Points history, culture and community are on display in a new exhibit

(DENVER, Colo.) Long-term residents of the Five Points neighborhood in Denver, Colorado, often note how much the neighborhood has changed in the past 50 years to the point that newcomers don’t always understand the rich history of the area. Now, an exhibit at the History Colorado Center in downtown Denver is dedicated to preserving that history.

Do we idolize athletes too much? Sports professionals weigh in on the future of sports

(DENVER, Colo.) The complex question, “Do we idolize professional athletes too much?” was one of many that were addressed by four sports professionals during a panel series at Cleo Parker Robinson Dance in the Five Points neighborhood of Denver, Colorado, on Juneteenth.

Three sisters are working together to sew and donate thousands of items to nursing homes, hospitals and others in need

(LITTLETON, Colo.) The sight of a bumble bee can represent many things — the fear of getting stung, the sweet taste of honey, the smell of fresh flowers. For sisters Barbara Goldsby, Joanne Isenhart and Karol Hodson, it signifies that anything is possible, and it’s the emblem of their non-profit organization, 3 Sisters Non-Profit.

(LITTLETON, Colo.) What will the city of Littleton look like in the year 2040? That’s the main question the Envision Littleton initiative aims to answer by developing the Unified Land Use Code—and it’s asking for community input.