Diagnosis of breast cancer during pregnancy

Breast cancer is rare during pregnancy. But if you feel a lump or notice any changes in your breasts, talk to your doctor right away. If breast cancer is suspected, there are tests that a pregnant woman can do, and if you are pregnant, there are options for treating breast cancer.

What is the prevalence of breast cancer during pregnancy?

Out of every 3,000 pregnant women, one gets breast cancer. But it is the most common type of cancer found during pregnancy.

Breast cancer is more difficult to diagnose during pregnancy.

Hormone changes during pregnancy cause the breasts to change. They may become larger, more prominent, or stiffer. This means that you and your doctor will not be able to diagnose a cancerous mass until it has grown.

Another reason for the difficulty in finding breast cancer early in pregnancy is that many women prefer to delay breast cancer screening with mammography until the end of the pregnancy. On the other hand, because pregnancy and breastfeeding can make breast tissue denser, early detection of cancer on mammography is more difficult.

Because of these challenges, a pregnant woman's breast cancer often develops at a more advanced stage than being diagnosed during non-pregnancy. And therefore more likely to spread to the lymph nodes.

What to look for?

If you feel a lump or notice changes in your breasts that are of concern to you, do not ignore them and talk to your doctor or midwife immediately. If your doctor does not recommend a mammogram, ask about other types of imaging procedures, such as ultrasound or MRI. You may need to talk to another doctor. Any suspicious changes in the breast should be checked or even sampled before it is considered a normal pregnancy change. 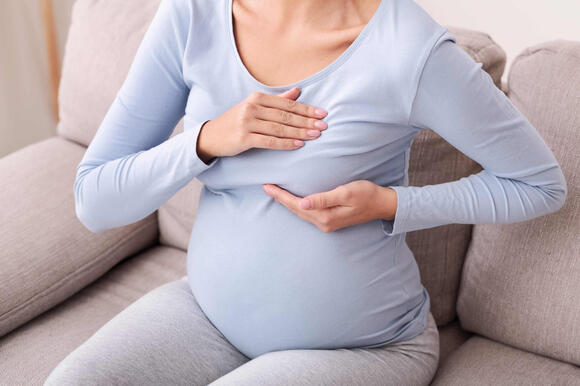 Are mammograms and other imaging tests safe during pregnancy?

The main concern about imaging tests during pregnancy is the exposure of the fetus to radiation, which can be harmful, especially in the first trimester of pregnancy.

Mammograms can also detect most breast cancers during pregnancy, and it is generally thought that having a mammogram during pregnancy is safe. The dose of radiation used in mammography is small and the radiation is focused on the breasts, so that most of it does not reach other parts of the body. A lead shield is placed on the lower abdomen to further protect and prevent radiation from reaching the uterus. However, small amounts of radiation may reach the fetus, and scientists are unsure about the effect of a very small dose of radiation on an unborn baby.

Breast ultrasound examinations do not use radiation and are thought to be safe during pregnancy. This test is usually easy, so it is often the first test recommended during pregnancy to assess changes in the breast.

MRI scans do not use radiation and are thought to be safe during pregnancy. But the contrast material (dye) used in MRI can pass through the placenta, the organ that connects the mother to the fetus. This color has been associated with fetal abnormalities in laboratory animals. For this reason, many doctors do not use contrast dyes on MRI during pregnancy. Contrast-enhanced MRI can be used if necessary.

Other tests, such as PET scans, bone scans, and computed tomography (CT) scans, may expose the fetus to radiation.

Breast sampling is often done using a hollow needle, and even during pregnancy, it is usually done on an outpatient basis. The doctor uses medication to numb the suspected area of the breast. This poses little risk to the fetus.

If the needle biopsy does not respond, the next step is usually sampling during surgery. This means removing a larger piece through a small incision in the breast. Surgical biopsies are often performed under general anesthesia (where you are given medicine to put you to deep sleep), which carries little risk to the fetus.

If breast cancer is found, you may need other tests to see if the cancer cells have spread to other parts of the body. This process is called staging. Depending on your case, different staging tests may be required.

As mentioned above, tests such as ultrasound and MRI scans do not use radiation and are thought to be safe during pregnancy. But the contrast agent (dye) that is sometimes used in MRI is usually not recommended during pregnancy. Contrast-enhanced MRI can be used if necessary.

Chest X-rays are sometimes needed to help make treatment decisions. This method uses a small dose of radiation. It is thought to be safe during pregnancy by using a lead belly protector.

Breast cancer has been diagnosed in humans since ancient times and has been mentioned in some historical writings, and it seems that breast cancer was first observed and treated historically in ancient Egypt.

Signs and symptoms of breast cancer can include swelling, cavitation, pain, nipple indentation, redness, etc. Breast cancer is caused by abnormal growth of cells in the breast. This cancer can start in different parts of the breast. Knowing what breasts should normally look like is an important part of breast health. Although regular screening tests are important to diagnose this cancer, mammograms do not detect any type of breast cancer.

I have breast cancer

Although breast cancer is one of the most common cancers in women and should be given a lot of attention, not all lumps that develop in the breast or are felt by women are necessarily cancer, and if they are cancerous, they can be diagnosed early. And they will be treated quickly, but many women are very worried and anxious when they see a lump in the breast and are even afraid to see a doctor. About 40% of women experience lumps in their breasts at some point in their lives.

Breast X-rays (mammograms) are important tests in the diagnosis of breast cancer. A mammogram is a low-dose X-ray of the breast which can pick up small changes that can’t be felt. Each breast is placed between two special plates and pressure is applied to get the best possible picture. Some women find mammography uncomfortable or even painful. However, it only lasts a few minutes and is not harmful.

Increased rates of breast cancer in women under 40 years old

Researchers at the University of Colorado in the United States have found that the rate of breast cancer has increased among women under the age of 40. However, in general, the incidence of this disease has been declining over the past decade.

Sometimes all you need is a mammogram. Sometimes a closer look is needed. And sometimes breast cancer is discovered. Mammography is the process of using low-energy X-rays to examine the human breast for diagnosis and screening. The goal of mammography is the early detection of breast cancer , typically through detection of characteristic masses or microcalcifications.

Breast cancer is the second leading cause of death in women

Unfortunately, the highest prevalence of breast cancer among women is in the fourth and fifth decades of life, which according to many doctors is a decade lower than global statistics. For this reason, it is recommended that all women under the age of 40 be examined by a physician at intervals of one to two years, and from this age onwards visit a physician every year. In fact, from the age of 40, in addition to examinations, mammography (breast imaging) should be performed annually so that by repeating these tests regularly, breast cancer can be identified in the early stages and treated definitively.

Breast cancer usually begins to spread to the lobule cells, which are the milk-producing glands, or to the milk ducts, where milk travels from the lobules to the nipples. Pathological reports indicate that the cancer has spread to the outer parts of the breast ducts or breast lobules.

Protrusion of the mammary lymph nodes

With the increase in the number of breast cancer patients, women have become more sensitive in referring to gynecologists and performing the tests needed to check the health status of the breast.

Women's breasts are made up of fatty tissue, lobes, lobules, milk ducts, lymph nodes, and blood vessels. This tissue covers the clavicle to the armpits and areas of the chest. Nerve cells and blood vessels are also found in this tissue.

What is breast cancer grade?

In general, the general classification of breast cancer is based on the comparison of cancer cells with normal cells. To find out the degree of breast cancer, there is usually a collaboration between an oncologist breast surgeon and a pathologist. After taking a sample from the patient's breast and sending it to the pathology of this sample, the tissue of the tumor is examined under a microscope. The pathologist also looks at the specific characteristics of cancer cells and divides breast cancer into grades 1 to 3.

October should not be seen as just one of the months of the year, but this month is a time to raise awareness of breast cancer as one of the most important cancers in the world, which has a high annual mortality rate.

Breast cancer or breast cancer is a type of cancer that starts in the breast tissue and occurs due to the abnormal growth of abnormal cells in the breast. The earlier the disease is diagnosed and treated, the easier it will be to treat and the more successful it will be.

Do teens get breast cancer?