Our delivery drivers are usually the most appreciated during the Christmas holidays, where a lot of orders are processed and delivered to homes across America. However, with the current state of the world, there’s been a massive influx of people ordering things online, even now in March 2021. In a way, it’s almost as if the holidays never actually ended for some people.

Over in Dauphin, Pennsylvania, a humble and brown-uniformed UPS driver has been able to meet his challenging quota each and every day with a lot of rigor, determination, and a positive mindset. He also would go out of his way to ensure all of the packages he was in charge of would arrive on time — and would often go out of his way to ensure that the needs of the community are met along the way.

His name is Chad Turns, and he is being rewarded for his amazing work ethic. The people who live all over the community have teamed up together a deliver a special package to him in the form of a whopping $1000.

A resident of the town, named Adam Shickley, reported that practically every single person in Dauphin has had encounters and personal experiences with Chad. For example, Adam had reported that Chad once thought a specific package to his family was a gift since there was a picture of a person on it. Chad had noticed that Adam’s kids were playing outside Adam’s house, so Chad waited until his shift was over to come back to the address — to ensure that the kids wouldn’t see the mystery surprise.

Adam’s wife, Jenny also had great things to say about Chad. For example, Jenny mentioned that on social media, another friend recalled that they needed a signed package but was not home to be able to sign it. Chad was pretty worried about the situation since he knew how important the package was to the friend, so Chad went over to the house of the parents of the friend just to get the package signed in a timely manner.

Amazed by his work ethic and amazing dedication to the people, Jenny got to work and set together a community fundraiser called the “Thank you, Chad” fundraiser. Her goal was to originally get $500 but then over $1000 flowed in. This just goes to show that even the kindest of people attract other equally kind people to help during the darkest of times. 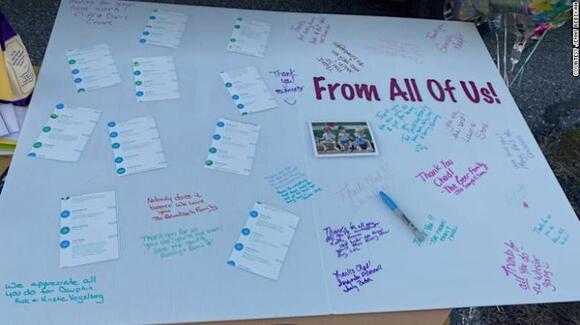 Jenny also enlisted help from one of Chad’s coworkers. The plan was simple, and a secretive plan at that. It involved a fictional pickup at the end of a day at a local municipal building. The plan was to get Chad to arrive at this facility. When Chad arrived, he expected a package, like usual. Instead, there were a bunch of people waiting for him, waving these giant signs of appreciation, with lots of smiles (behind their masks), and a big handmade autographed card.

Chad was pretty surprised by the situation. He was humbled and overwhelmed by it all and even cried. Chad didn’t think that the people of Dauphin would be so nice to him — especially to go above and beyond, just as he did for them. He appreciated the kind gesture.

Even the official UPS spokesperson, Jackie Fajt, issued a statement of the situation, where they appreciated how the celebration bonded Chad, a respected driver, with a loyal and devoted community base. Jackie reported that Chad was a great asset to UPS and had been doing this sort of thing for over 10 years.

Not many people expect so much kindness from their delivery guy — but Chad showed us that it takes a special someone to work above and beyond their means. Chad really loves his community and his community really loves him. There are probably many people like Chad out there in the world, who are able to deliver many packages and keep people happy, especially during times like these.