Father and Adopted Son Take In A New Adopted Teen 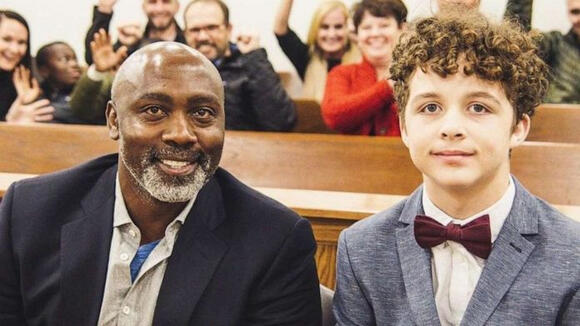 Regardless of the family, you are born into, a loving father’s kind gesture surpasses all boundaries, regardless of how the child looks. One specific father wanted to inspire others to understand that adopting those who look different from you is more than okay.

His name is Peter Mutbazi and he adopted a young boy named Anthony, affectionally called Tony. Tony Mutabazi’s childhood wasn’t an easy one. After he was born, his parents put him for adoption and he remained in the system until being adopted at age 4.

Tony was then abandoned in a Charlotte, North Carolina hospital when he was 11. His adopted parents never returned.

Days later, also in Charlotte, North Carolina, Peter received a phone call from a foster care center worker named Jessica Ward. Jessica asked Peter to take Tony for the weekend. Peter had already been a foster parent for three years and was more than happy to help out. Peter had cried at the time, at the cruel gesture that Tony’s first set of foster parents did to him. Peter felt compelled to take him and had the resources and room to do so.

Since then, Peter has helped out Tony a great deal. For example, they might watch movies, take up some cycling, and play board games together. Back in November 2019, the adoption became official for the teen.

Since that time, Tony has always looked up to Peter and has always called him “dad”. A photo of the two of them went viral last year, where the two have shared their journey on Instagram.

For Peter personally, Peter liked helping out foster kids due to his own childhood experiences in Uganda. He had fled his abusive home when he was either 10 or 11-years-old. After he fled, he became a bit of a street kid in Kampala, Uganda. Soon after, a parental figure took him in and made sure Peter finished school.

For Peter, he likes the idea of paying it forward, since someone once helped him, so he should help someone else as well. Plus, Peter is aware that teens often have a lower adoption rate compared to really long children. Teens often have to wait longer just to get adopted — if they get adopted at all — and are more likely to end up with troubling lives if no one does take them in.

Peter became a licensed foster and had hosted about 12 different placements over the years and then met with Tony. When Peter met Tony, Tony was told he could choose his own father and Tony chose Peter to become his new dad. This encouragement from Tony was all that Peter needed to be the best dad for him.

In 2021, Tony came up with a great idea to adopt another teenager. At first, Peter noted that he already had a teen (Tony), but decided that maybe he wanted to. Peter reflected that back in 2020, he (Peter) was able to advocate for teen-fostering and adoption with AdoptUSKids.

After the chat and by sheer coincidence, a social worker called Peter and to tell him about a teen who needed a foster home and decided that this was a major sign. This teen was 16-years-old and had 1–2 years left to remain in foster care. Peter reflected that he could try to give him some life skills, like obtaining a driver’s license, schooling, and getting a job.

Peter and Tony welcomed Kai into their home.

While some people are hesitant to adopt older teens, Peter thinks it’s a great idea. Since then, the family has now started making online videos where you can catch up on their shenanigans, including the adventures of the family puppy named Simba.