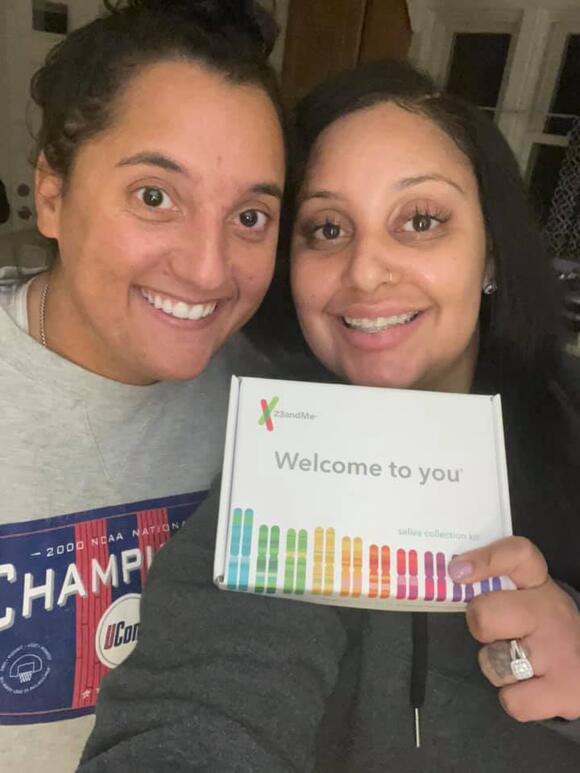 Sometimes, when we meet people, there is a special friendship that sparks organically. In New Haven, Connecticut, this is exactly what happened for two coworkers who became friends and then later realized that they were literal sisters.

Julia Tinetti and Cassandra Madison were both born in the Dominican Republic and were adopted at a later time. Curiously, both women worked at New Haven’s Russian Lady bar and mused about the similarities between one another.

For example, Cassandra has an arm tattoo that contains the Dominican Republic flag. Julia mused about being from the Dominican Republic, causing Cassandra to be surprised. Both were adopted. Both also have similar personalities and similar kinds of clothes. The two women remarked over their similarities and others joked and teased them for being “practically sisters”.

It turns out they were right — literally.

Julia and Cassandra first got suspicious when they realized that one another was adopted. However, according to their respective paperwork, they didn’t seem related. The news made them both sad, but the two remained close friends. After some time, Cassandra moved to Virginia Beach, but Julia and Cassandra remained friends.

Over in the south, Cassandra decided to find out more about her origin story. Meanwhile, in Connecticut, Julia was not as interested. Julia was worried about finding some kind of traumatic or distressing information. Julia wanted to focus more on her future and her adopted family.

During Christmas of 2018, Cassandra’s adoptive mom decided to give her a genetic testing kit. From this testing kid, Cassandra was able to locate and identify several distant family members.

Cassandra even found a cousin who was actually living back in Connecticut. The cousin was able to help her find her birth family in the Dominican Republic. Unfortunately for Cassandra, her biological mother had died back in 2015. Cassandra was able to learn, much to her excitement that she had a father, named Adriano Luna Collada, and several siblings. They seemed equally excited to meet her as well.

In 2019, Cassandra flew down to the Dominican Republic for the anticipated family reunion. Cassandra bonded with the family immediately, as if she had known them all of her life.

Now — this is where things get crazy and become worthy of a fantastical movie.

In December of 2020, Julia’s childhood friend Molly Sapadin, who also became friends with Cassandra, made a shocking discovery — she found out she (Molly) was adopted from the same region of the Dominican Republic on the exact same day as Cassandra. When Molly saw a specific surname of “Collado” on Cassandra’s online post about her 2019 family reunion, it rang a huge bell in Molly’s head.

Molly obtained her adoption papers and “learned” initially that she and Cassandra had the same birth mother — but this turned out to NOT be true. As the DNA tests inferred, Molly’s adoption paper records had been accidentally switched with Julia’s. This means that Julia was in fact, the biological sister of Cassandra, while Molly was secretly their cousin the whole time. The biological DNA testing verified that Molly had a twin sibling, but this twin sibling has yet to be identified.

When Cassandra spoke to her biological father, he was able to eventually confirm that the family had in fact put up a second daughter for adoption during a time of dire financial hardship, due to some health scares in the family. As to why the father never talked about this — Adrian admitted it was a hard chapter to talk about and struggled to vocalize his feelings and thoughts surrounding that time. There also seemed to be difficulty in processing the grief of losing his wife as well.

For now, the sisters plan to have a proper reunion, once certain world events are no longer in the picture. For now, they are getting to know their biological family and one another through video chat. In a public post, Cassandra uploaded and shared her story:

Julia and I met in 2013 working at Russian Lady in New Haven, CT. Julia notices the Dominican flag on my arm and makes a comment about how she’s Dominican too BUT she’s adopted from there. I stop her in her tracks and tell her I’m adopted from there too. We become friends, start wearing matching clothes, having a blast together and telling everyone “we’re sisters”.

Fast forward to 2021 and I ask my dad if he gave up another baby he says yes! I’m buggin out, omg there’s one more sibling!!! I jump in my car last minute and drove to CT to get her to do 23andme and the results came back yesterday. WE ARE SISTERS ! Same mom, same dad ! Just two girls who happen to work together find out they’re sisters.

When asked about the situation directly, Julia believes that this circumstance was just meant to be. It just goes to show that even when you are separated from family, our close bonds bring us back together.